Party leaders said the BJP leadership refused to nominate Virender Kashyap on the basis of a survey that suggested that 66 per cent of people were not in his favour. 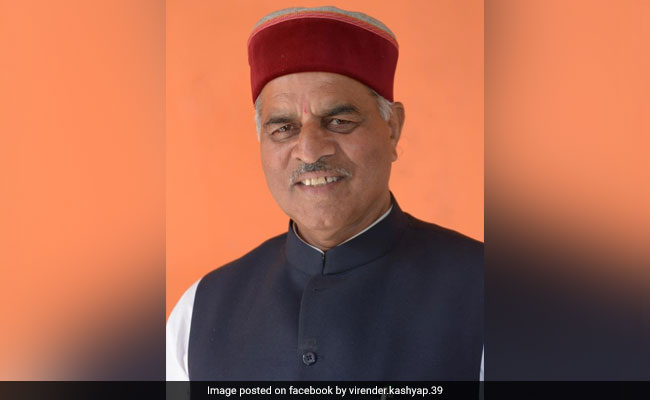 Virender Kashyap was elected to Parliament first in 2009 by defying Congress' sweep in Himachal Pradesh.

The BJP has denied a Lok Sabha-poll ticket to its sitting lawmaker in Shimla (Reserved) constituency, Virender Kashyap. The party has instead fielded greenhorn Suresh Kashyap, a sitting legislator from Pachhad in Sirmaur district, against Dhani Ram Shandil of the Congress.

Virender Kashyap, 68, was elected to Parliament for the first time in 2009 by defying the Congress sweep in Himachal Pradesh.

Party leaders said the BJP leadership refused to nominate Virender Kashyap on the basis of a survey that suggested that 66 per cent of people were not in his favour.

"This time the party has changed my role. We will fight together and ensure victory on all four Lok Sabha seats in the state," Virender Kashyap told news agency IANS.

In 2014, he retained the seat by defeating Congress' Mohan Lal Brakta with a huge margin of 84,187 votes.

The Shimla constituency, which covers three districts of Shimla, Sirmaur and Solan, had gone along predictable lines for decades, returning Congress candidate KD Sultanpuri six times, from 1980 to 1998. In all these years, KD Sultanpuri defeated Virender Kashyap.

In 1999, when KD Sultanpuri was denied the Congress ticket, the BJP left the seat for its alliance partner Himachal Vikas Congress (HVC) that was floated by former Telecom minister Sukh Ram after parting ways with the Congress.

At that time, the Congress lost all the four seats.

To ensure his maiden victory, Virender Kashyap reached out to his electors by writing over one million postcards.