Mr Modi, who also holds the finance portfolio, was one of those who had filed a plea in the case at Patna High Court following which the probe was handed over to the CBI. 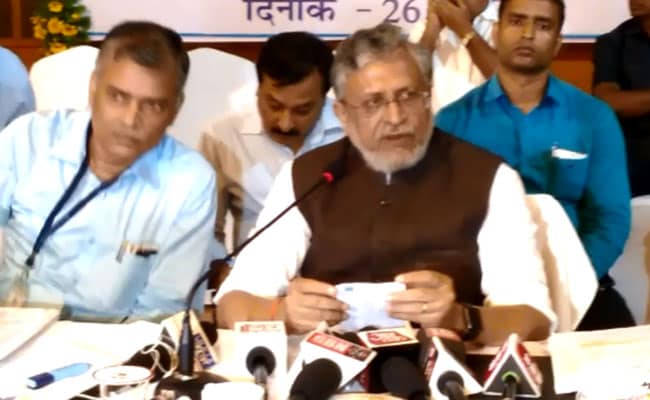 Irregular expenditures in excess of Rs 650 crore between 1987 and 1997 - the period during which the fodder scam happened - are being scrutinized by courts probing the multi-crore-rupee scandal, Bihar Deputy Chief Minister Sushil Kumar Modi has said in the assembly.

Mr Modi, who also holds the finance portfolio, was one of those who had filed a plea in the case at Patna High Court following which the probe was handed over to the CBI.

Rashtriya Janata Dal supremo (RJD) Lalu Prasad Yadav, who was the chief minister of undivided Bihar till 1997, is serving prison sentences in a number of cases related to the scam, while his predecessor Jagannath Mishra is out on bail and undergoing treatment for cancer.

Citing examples of the massive financial irregularities during the 80s and the 90s, Mr Modi told the House, "Fodder worth Rs 10.5 crore was required for cattle and poultry in Chaibasa, Gumla, Dumka, Jamshedpur and Ranchi (now in Jharkhand) besides Patna. But an expenditure of Rs 253.33 crore was shown by the animal husbandry department."

For these six districts, purchase of yellow corn and almond straw - used in very small proportions for fodder - had been shown multiple times the actual requirement, the senior Bharatiya Janata Party (BJP) leader said on Wednesday.

"The extent of the financial indiscipline can be gauged from a single example - the then general manager of a dairy farm at Hotwar - near Ranchi - showed an expenditure of Rs 15.50 lakh towards purchase of mustard oil for applying on the horns of buffaloes," Mr Modi said evoking peals of laughter.

The RJD supremo's son, Tejashwi Yadav, also drew sharp criticism from the deputy chief minister over his failure to attend the House during the ongoing session which began a month ago.

Notably, RJD MLAs had staged a walkout when Mr Modi was making his submission. The government''s appropriation bill was also passed by a voice vote at that time.

The Lalu Prasad-led party later reacted indignantly, with its MLA and spokesman Shakti Singh Yadav issuing a statement accusing the deputy chief minister of "trying to hide his own failures and diverting public attention through false and out-of-context criticisms of Lalu Prasad and his family members".