The court's order scrapping the wedding came in May and was sent to Vinod Kumar just a few days ago. What helped was intervention by the police. Not at the local level, however. 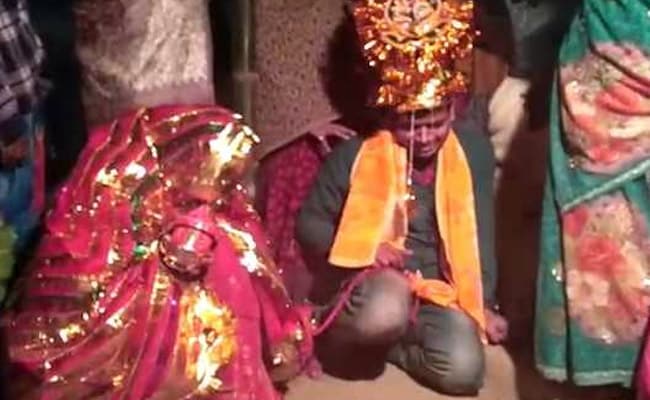 The groom was dragged to the "mandap" and he wept through his wedding in a video from Bihar that went viral in December 2017. Vinod Kumar's wedding-at-gunpoint has now been annulled by a family court in Patna.

In the video of the 'Pakadwa Vivah' (forced marriage), Vinod Kumar, then a junior manager at the Bokaro Steel Plant, is seen in a suit and traditional wedding headgear. He is forced to sit for the wedding rituals, surrounded apparently by the bride's family.

The court's order scrapping the wedding came in May and was sent to Vinod Kumar just a few days ago. What helped was intervention by the police. Not at the local level, however.

The police in the area where his "wedding" took place tried to hush up the incident, but senior officers stepped in when they saw the video and found Vinod's allegations true.

The 30-year-old engineer filed two cases in his desperation to get out of the forced marriage -- one for having the wedding declared null and void and another, a criminal case.

Vinod said the video, which has even inspired a Hindi movie due for release next month, really left no doubts about what had happened to him.

"Surender Yadav, the woman's brother, thrashed me and threatened to kill me if I didn't marry his sister. They dragged me to the mandap, and put a gun to my head. I felt so helpless. There was nothing I could do. I kept crying but they weren't bothered," he told NDTV in January, 2018.

The operation was well-planned, he said. He left home to attend a friend's wedding in Patna. An acquaintance offered to drop him off but took him home saying he wanted to pick up something. At the house, everything was ready for a wedding. Vinod was allegedly threatened with a gun, locked up in a room and beaten.

Vinod says even though there is hardly any chance of the bride's family challenging the court order, "I'm determined to fight till the last."

The "Pakadwa wedding" - in which a groom is kidnapped by the bride's family - was a common phenomenon in Bihar several years ago but as the law and order situation improved, such incidents have reduced.