The statement issued by Mahagathbandhan leaders said their alliance is not a tie-up between leaders of parties but a joint commitment towards upliftment of marginalised sections. 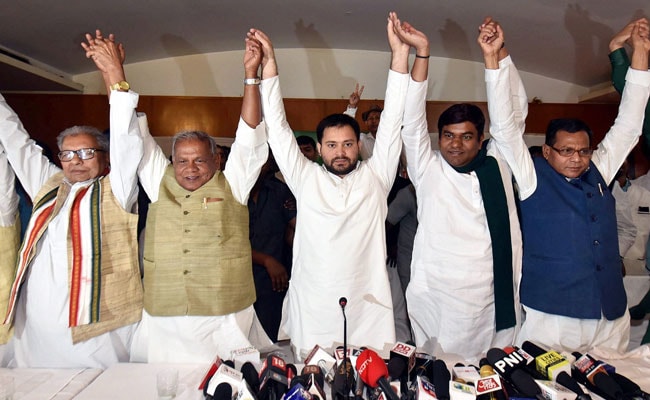 The meeting was held at the residence of RJD national vice president Rabri Devi. (File)

Leaders of the opposition ''Mahagathbandhan'' in Bihar, the multi-party formation which suffered virtual obliteration in the Lok Sabha election, on Tuesday held a meeting here in an apparent bid to pick up the threads in the state where assembly polls are due next year.

The meeting was held at the residence of RJD national vice president and former chief minister Rabri Devi where his son and heir apparent Tejashwi Yadav, state unit chief Ram Chandra Purve and veteran leader Jagadanand Singh were among those present.

The Congress was represented by its national secretary in-charge for Bihar Virendra Rathore and state unit president Madan Mohan Jha, while Upendra Kushwaha, Jitan Ram Manjhi and Mukesh Sahni - founders of RLSP HAM and VIP respectively - were also present at the meeting.

In a statement issued by the Mahagathbandhan thereafter, the leaders said, "The coalition of RJD, Congress, RLSP, HAM and VIP was not just for elections. The alliance understands its responsibility towards poor, Dalits, backwards and other deprived classes for whom the governments at the Centre and in the state seem to have least concern."

"The economy is in dire straits and bleeding dry farmers and those employed in the unorganised sector. Centuries old traditions are under assault as manifested in the recent vandalizing of a Sant Ravidas temple. RSS and BJP are working towards altering the Constitution and scrapping reservations for backward classes.

Social harmony is under threat and the coalition, which has been ruling Bihar for over a decade, has been a failure on law and order, education, health and job creation fronts," it alleged.

The statement said their alliance is not a tie-up between leaders of parties but a joint commitment towards upliftment of marginalised sections.

"At today's meetings, it has been resolved that we will devote ourselves to public agitations with a view to make people of the state politically aware about the issues that really concern them," it added.

This was the first occasion when leaders of the Mahagathbandhan constituents sat together after the drubbing in the Lok Sabha polls in which the coalition conceded 39 out of the 40 Lok Sabha seats in the state to the BJP-led NDA, which also includes Ram Vilas Paswan's Lok Janshakti Party in Bihar.

After the meeting, the Mahagathbandhan leaders had a brief interaction with a posse of journalists that waited outside 10, Circular Road where Rabri Devi resides. Tejashwi Yadav, who chose to remain inside, was conspicuous by his absence. All eyes were on Manjhi, a former chief minister, who had recently expressed his dissatisfaction with the grand alliance and fuelled speculation by hinting that he might go alone in the assembly polls.

The HAM president, who had expressed strong displeasure over Tejashwi Yadav remaining absent from the recently-held month-long monsoon session of the assembly earlier in the day, changed tack after the meeting and said "he is back in action. He is raising the very important issue of shops being razed in the name of anti-encroachment drive".

Downplaying the decision of the media savvy young RJD leader to stay inside, while others interacted with journalists, Manjhi, however, dodged queries as to whether a consensus had been reached with regard to projecting Tejashwi as the Mahagathbandhan's chief ministerial candidate.

The RJD had declared Tejashwi its chief ministerial candidate at a party convention in 2017 though it is yet to be endorsed by other alliance partners.

"What is the hurry? At present, the NDA is also not clear whether it would like to contest assembly polls under the leadership of Chief Minister Nitish Kumar. Let them take the lead. We will announce our leader later," Mr Manjhi said.

Having called the meeting "too little, too late" just before he left for Rabri Devi's residence, the mercurial HAM leader appeared upbeat upon conclusion of the meeting as he said "we are now going to meet on a regular basis. Past debacle has to be left behind. We are going to emerge stronger in the bypolls this year and the assembly elections next year".

Mr Rathore too called "hypothetical" queries about the Mahagathbandhan declaring Tejashwi as its face for the assembly polls.