With Nitish Kumar's Janata Dal (United) breaking ties with the BJP in Bihar, the National Democratic Alliance, or NDA, has suffered a small setback in Rajya Sabha.

The NDA did not have a majority in the upper house even when the JD(U) was part of it. Mr Kumar's JD(U) is the third party to leave the NDA in the last three years. Earlier, the Shiv Sena and the Shiromani Akal Dal quit the NDA. The Telugu Desam Party, or TDP, left before the general elections in 2019.

With the JD(U) no longer with the NDA, the BJP-led national coalition will be more dependent on other neutral parties such as Odisha's Biju Janata Dal, or BJD, and Andhra Pradesh's YSR Congress Party, or YSRCP, to push crucial bills through the upper house.

The current strength of Rajya Sabha is 237. There are eight vacancies - four from Jammu and Kashmir, one from Tripura and three to be nominated. The majority mark is 119.

The NDA's strength in Rajya Sabha was 114, which includes five nominated MPs and one independent.

After the JD(U) left the scene, the NDA's number has been reduced to 109, or 10 short of the majority mark. 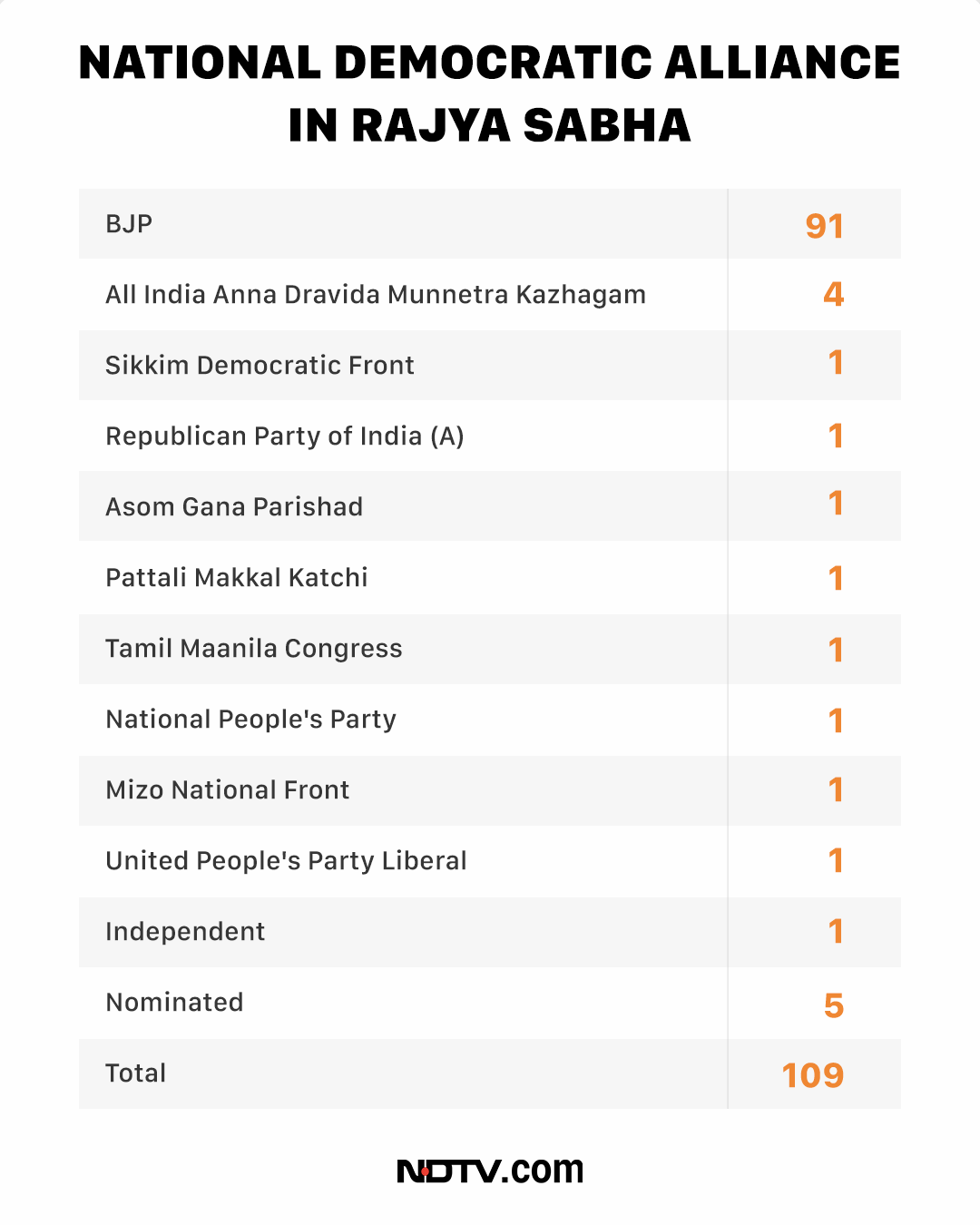 The National Democratic Alliance, or NDA, in Rajya Sabha

The government can nominate three more MPs before the winter session and the BJP is likely to win the Tripura seat, whenever election takes place. Even then, the NDA's strength will be 113, which will still be short of the new halfway mark of 121.

The BJP will need the support of the BJD and the YSRCP - which has nine MPs each - on crucial bills.

In the recent presidential and vice presidential elections, however, the BJP got support of the BJD, YSRC, TDP, Shiromani Akal Dal and Mayawati's Bahujan Samaj Party.

Mr Kumar will take oath as Chief Minister of Bihar today at 2 pm. Rashtriya Janata Dal's Tejashwi Yadav will be the Chief Minister's deputy in the new "Grand Alliance".