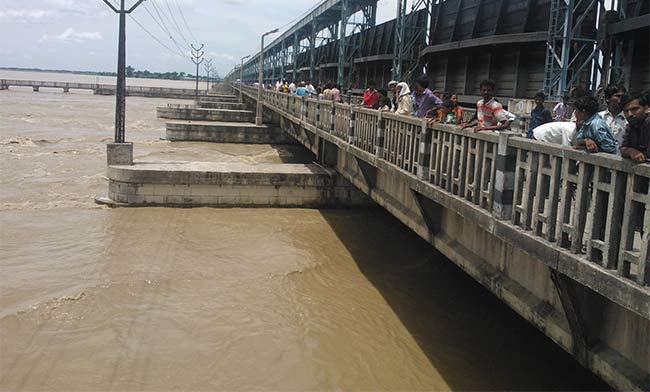 The Kosi barrage in Birpur in Bihar which serves as the entry point for the river into India. (Image used for representational purpose)

Patna: Bihar is the country's most flood-prone state with 73 per cent of its 94,163-sq.km area getting flooded annually, the International Water Management Institute (IWMI) said in Patna today.

76 per cent people of North Bihar are at risk of getting caught in floods, said Giriraj Amarnath, senior researcher and project lead of IWMI, who added that Index-based Flood Insurance (IBFI) could prove to be a boon for the situation.

Speaking at a workshop here, he said that IBFI can ensure an objective, post-flood compensatory mechanism to enable robustness against uncertainties and minimise the burden on governments.

"IBFI can help bridge the liquidity gap faced by governments between immediate emergency aid and long-term development assistance. It can also help unlock the money kept for relief," he said.

The project aims to integrate hi-tech modelling and satellite imagery with other data to predetermine flood thresholds, which could lead to effective compensation payout schemes for low-income, flood-prone communities.

Rajya Sabha member and former Union Minister CP Thakur praised the efforts by IWMI in this regard and suggested they broad-base the concept to include landless poor engaged in agriculture activities as, otherwise, the scheme will not be successful.

"IBFI should consider the poor also and focus on the plight of agriculture after floods. It could be successful only if poverty is also alleviated," Mr Thakur added.