At yesterday's meeting with the media, Sushil Modi and two other key leaders of the party insisted that Nitish Kumar will remain the NDA's Chief Minister. 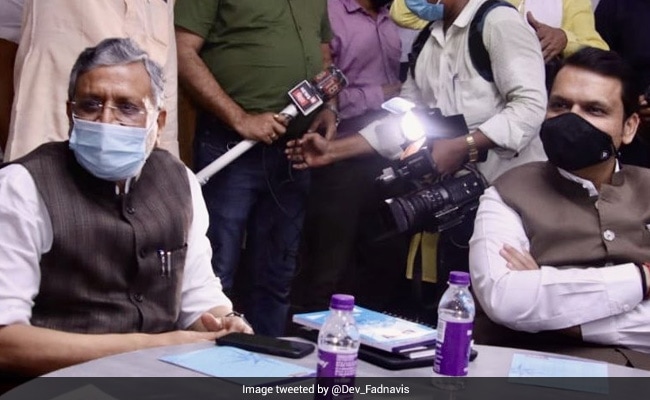 The BJP today issued a strong message to Chirag Paswan and its own rebels queueing up to contest the coming elections from his party. 'Come back to the BJP fold or be expelled' was the message, delivered in clear terms by the party's seniormost leader in the state Sushil Modi and its state elections in-charge Devendra Fadnavis. There was also the threat of police case -- delivered by state party chief Sanjay Jaiswal -- for any non-NDA candidate using photos of Narendra Modi for campaign.

Rebels contesting from Chirag Paswan's Lok Janshakti Party would lead to a loss of face for the BJP, which appears eager to mend fences with Nitish Kumar, the state's five-time Chief Minister.  They would also pose problems for the new BJP candidates fielded from their constituencies.

Sources said by giving top priority to BJP leaders denied ticket by their party, Chirag Paswan has created more of a headache for the BJP than for Nitish Kumar.

"Don't harbour any illusion -- those who do not respond to the party's requests will be immediately expelled," Sushil Modi said in a direct message to the rebels, whose ranks include Rajendra Singh, the former BJP in-charge of Jharkhand, the contestant from Dinara, former MLA Usha Vidyarthi who will be contesting from Paliganj and sitting MLA Ravindra Yadav from Jhaja.

Yesterday, following speculation that Chirag Paswan's move had the tacit support of the BJP, the party issued a clarification.

Multiple leaders of the BJP assured that Nitish Kumar would remain the Chief Minister for the NDA -- making it clear that Chirag Paswan's ambitions for the state's top job will not be accommodated and putting him in his place.

BJP chief Sanjay Jaiswal and Sushil Modi tightened the screws, saying anyone contesting from NDA will have to accept the leadership of Nitish Kumar and action will be taken against any non-NDA candidate seen seeking votes in the name of Prime Minister Narendra Modi.

Today, Sanjay Jaiswal threatened to file a police case against the LJP if their candidates used the photos of the Prime Minister, who is the biggest campaigner of the BJP.

Sushil Modi, who is also Mr Kumar's deputy in the state government, said Chirag Paswan could not have taken such a step if his father Ram Vilas Paswan – a minister in Prime Minister  Narendra Modi's government -- was around.

Mr Paswan, 74, recently had a heart surgery and is recuperating in hospital.