"Instead of asking people to come to him and talk about their problems, he instigated them and said 'pheko, pheko aur pheko,'" the Lok Janshakti Party chief said today. 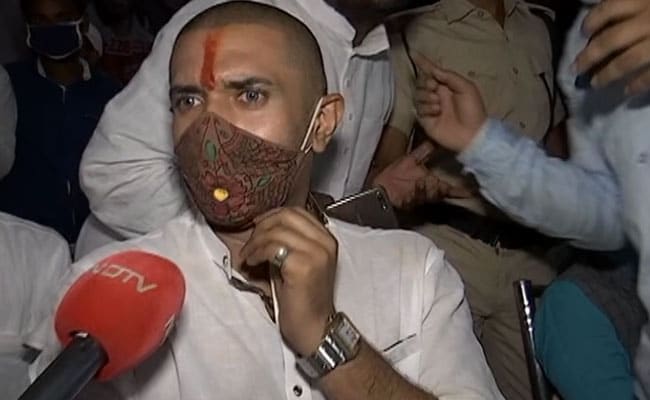 Bihar Chief Minister Nitish Kumar, who faced an onion attack at a recent public meeting while campaigning for state polls, received support from his opposition rival Tejashwi Yadav yesterday, who condemned the incident. His ally-turned-critic Chirag Paswan was less charitable.

"Instead of asking people to come to him and talk about their problems, he instigated them and said 'pheko, pheko aur pheko. I don't appreciate the way he reacted," the Lok Janshakti Party chief said today.

Chirag Paswan's attacks on the Chief Minister have been increasingly bitter since he announced his decision to contest the Bihar election separately from the National Democratic Alliance (NDA) and break off ties with Nitish Kumar while staying with the BJP.

He recently declared that Nitish Kumar would "never again return as Chief Minister" after November 10 (the day of the Bihar results).

In contrast, Tejashwi Yadav, the opposition coalition's chief ministerial face, gave a measured response to Nitish Kumar being attacked with onions by a crowd and said there were other ways to protest.

"I condemn the incident. There are other forms of protest in a democracy like voting. This incident should not have occurred. I don't like this. Our fight is based only on issues," Mr Yadav said, according to ANI.

On Tuesday, Nitish Kumar was campaigning in Madhubani for the state election ending Saturday when onions were thrown at the stage. His security men instantly formed a shield around him as he continued his speech.

When the man throwing onions was apparently caught by security personnel, Nitish Kumar said: "Let him go, don't pay any attention to him."

Mr Kumar is believed to be fighting a relatively tougher challenge this time as he eyes a fourth straight term. He and his ministers have faced public anger while campaigning, with the opposition highlighting the jobs and migrant crises.