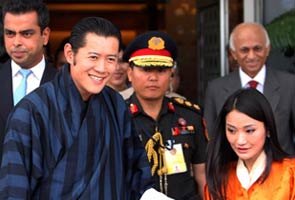 Punakha, Bhutan: The royal couple of Bhutan, King Jigme Khesar Namgyal Wangchuk and his wife Queen Jetsun Pema, have landed in New Delhi on a nine-day state visit which includes a honeymoon in Rajasthan.

This is the Bhutan King's fourth visit to India since his coronation in November, 2008.

It is, however, the first visit of Jetsun Pema Wangchuck as Queen of Bhutan. She tied the knot with the 31-year-old king at a colourful Buddhist ceremony at a 17th century monastery in the ancient capital of Punakha October 13.

The President will hold a banquet in their honour; the king will also hold talks with Prime Minister Manmohan Singh. In the middle of all the official engagements a short holiday, or honeymoon, has been planned - perhaps to Rajasthan.

The India-Bhutan relationship goes back to 1958 when India's first prime minister Jawaharlal Nehru visited Bhutan and extended a hand of friendship. Five decades later, his great grandson Rahul Gandhi continues the tradition; he not only attended the wedding as a chief guest, but also stayed in Bhutan for three days.

Bhutan's even keeled, happy relationship with India makes it one of the most satisfying for Delhi, otherwise surrounded by hostile or difficult dealings with the rest of its neighbours.

The landlocked Himalayan kingdom too places its friendship with India on a high priority. In fact, India is one of the few countries that Bhutan has allowed to establish a diplomatic presence in Thimphu. Neither the US nor China have diplomatic missions in Bhutan.

In return, many of Bhutan's major development and infrastructure projects are funded by Delhi.

"There might have been fears in the beginning but the world is changing fast, fears are getting less. A time might come when we open up to India and other countries as well; when we opened up we decided we are a small country and won't have foreign relations with super powers, said Dasho Kinley Dorji, Secretary of Bhutan's Ministry of Information and an author.

Official sources in the Bhutanese government have told NDTV that China is a sensitive issue. China's might, its claim over Tibet, and not wanting to rattle India by befriending China are all part of its foreign policy.

Bhutan's economic policy, however, is guided not by Gross Domestic Product, but by Gross National Happiness - calculated by counting number of trees, monasteries, schools and assessing people's feelings.

Sandwiched between India and China, Bhutan has felt its strength is its unique culture and tradition. And it feels that will protect its independence, hence so much focus on preserving it. But years of isolation has led to a population that finds it difficult to question unaccustomed, to voicing their opinion freely or having the media do it for them. With democracy, signs of change are visible, then again, democracy was a king's gift not a peoples demand.

Promoted
Listen to the latest songs, only on JioSaavn.com
Bhutan faces many challenges - political and economic - the biggest one being: Will their unique model of development work? The answer to that perhaps lies in how soon its dependence on neighbours like India will reduce.