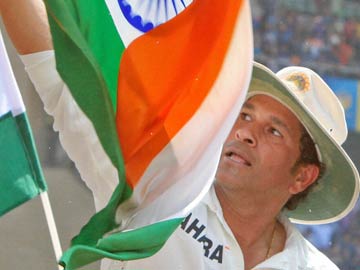 "I dedicate this award to my mother," the man called the God of Cricket said. Sachin had made special arrangements to ensure his mother, Rajni Tendulkar, watched his 200th and last Test match against West Indies at Mumbai's Wankhede stadium, which ended today. (Sachin says goodbye with tears)

Sachin, 40, will the youngest recipient of the award. He is also the first sportsperson to be chosen for the honour.

Chintamani Nagesa Ramachandra Rao, who serves as the head of the Scientific Advisory Council to the Prime Minister of India, also joins the select list of India's 41 Bharat Ratnas.

An international authority on solid state and materials chemistry, the 79-year-old scientist has authored about 45 books and 1500 research papers in his career spanning over five decades. He is the third man of science after C V Raman and former President APJ Abdul Kalam to be given the Bharat Ratna.

For Sachin Tendulkar the announcement crowned a prolonged and emotional farewell from a tearful nation of cricket lovers. He finished exactly 24 years of playing Test cricket for India yesterday, ending his last innings with a sublime 74. He holds almost every batting record in the book and is acknowledged by many as the world's best batsman ever.

Promoted
Listen to the latest songs, only on JioSaavn.com
There have been demands for several years now that India's most prolific batsman be honoured as a Bharat Ratna or India's gem. The award is given in recognition of exceptional service of the highest order. It was instituted in 1954.

The last Bharat Ratna was conferred upon Hindustani music doyen Bhimsen Joshi in 2009.