Bharat Bandh: The government says the Farm Bills 2020 are meant to help small and marginal farmers. 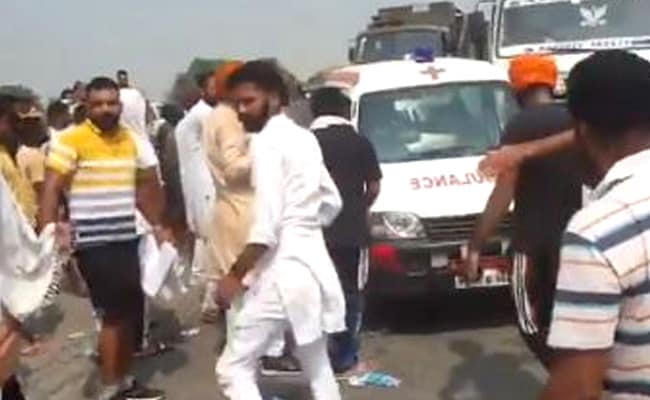 Bharat Bandh: Protesting farmers are seen clearing up the road.

As farmers continue the "Bharat Bandh" protest in Haryana, Punjab and parts of Uttar Pradesh against three new farm bills, which cleared the parliament last week, roads and railway tracks were blocked in several parts of the three states. While powerful visuals captured the protest by farmers, two clips - one from Punjab and another from UP - showed them clearing way for ambulances.

A 33-second video shot on the Amritsar-Pathankot highway shows some protesters making way for an ambulance. A group of protesters, holding placards, clear up the road as the ambulance followed by a car move ahead. Some of the farmers are seen sitting on a tractor, while some trucks are blocking the road.

Another clip fom UP's Hapur shows a large number of farmers helping an ambulance find its way through the crowd. While some traffic cops can also be seen in the video, the protesters apparently moved aside on their own, without any police intervention.

The Bharat Bandh protests caught momentum this morning with videos and photos capturing the fierce agitation from three states. In a clip from UP's Shahjahanpur, a huge crowd can be seen on a national highway.

Farmers and the @Uppolice help to make way for an ambulance during the #FarmersProtest in west UP's Hapur . Good job ???????? pic.twitter.com/Uekm8lwBOD

The government says the new bills are meant to help small and marginal farmers. However, farmers fear they will no longer get paid at the Minimum Support Price or MSP and commission agents fear they will be hit. The bills have been called "anti-farmer" by the opposition parties.

Today's protest is being backed by the Congress, the RJD and the Trinamool, as well as 10 central trade unions.