The protestors say Father Stan Swamy was falsely implicated by the Jharkhand government. 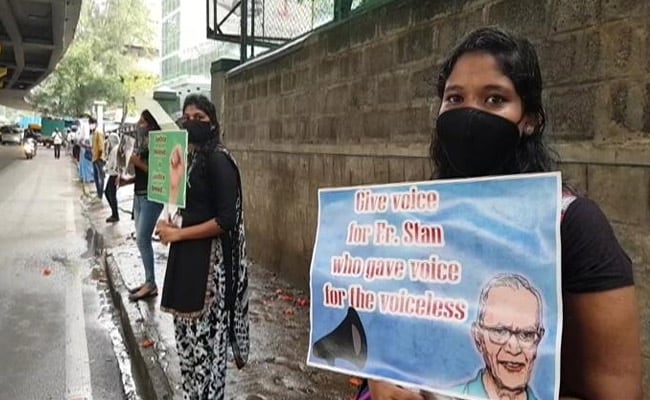 A large number of protestors formed a human chain in Bengaluru today against what they described as "the illegal treatment and arrest of Father Stan Swamy from his residence in Jharkhand by the National Investigation Agency (NIA), falsely implicating him in the Bhima Koregaon case."

The protestors allege that the state of Jharkhand falsely accused and implicated him to "stall the judicial process to give justice to the innocent Adivasis in the region."

Today's silent human chain extended from the city's Brigade Road to the Shantinagar Bus Depot, a little over three kilometres away.

Father Stan Swamy, 83, is a Jesuit priest who has been working with Adivasis for over 30 years, focusing on their land rights.

"We request the government to not only not take any action but encourage Father Stan Swamy because he is working for the poor. Ultimately, the poor are our backbone," Dr Peter Machado, Metropolitan Archbishop of Bengaluru, told NDTV.

He also said that the aged priest was working under the constitution.

"We want to make the point that Father Stan Swamy should be released immediately," said Latha Paul, lecturer in the department of social works at the city's St Joseph's College. Referring to today's event, Ms Paul said around 1,000 people had formed the human chain.

On October 9, Father Stan Swamy was arrested in Ranchi by NIA officials from Delhi. They alleged that the priest was a member of the banned Communist Party of India-Maoist (CPI-Maoist) and was "actively involved in its activities".

The Bhima Koregaon case, for which he has been arrested, relates to an event on December 31, 2017, in Pune which was followed by violence and arson in Maharashtra that left one person dead.

"It is important to note that Father Stan Swamy has always cooperated with the investigating agencies and has always provided detailed statements," said a press release by the organisers of today's protest in Bengaluru.

Landmine Explosions Due To Forest Fire Along Line Of Control: Report