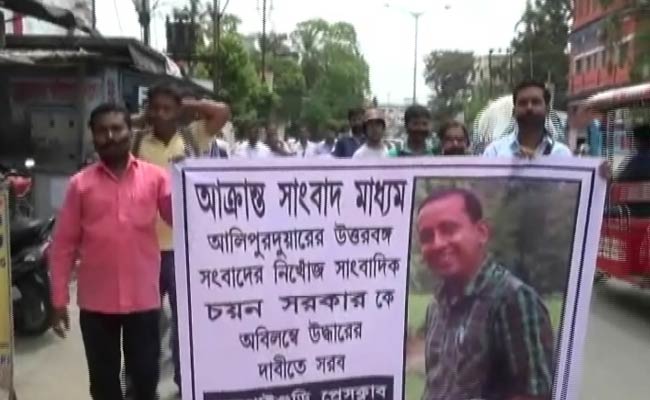 Chayan Sarkar, a correspondent with the Uttarbanga Sangbad, is missing since Sunday morning.

Kolkata: Days after he reported about irregularities and corruption in the admission process in a college, a journalist with a Bengali daily in West Bengal's Alipurduar district has gone missing.

Chayan Sarkar, a correspondent with the Uttarbanga Sangbad, is missing since Sunday morning, days after he lodged a complaint with police in Alipurduar alleging that he was being threatened.

While his family members filed a police complaint, the matter has now been handed over to the Criminal Investigation Department (CID).

"We have launched a manhunt for him. We have questioned several people in this regard and we are looking for him. We cannot say at the moment if he has been abducted," Deputy Inspector General (CID) Dilip Kumar Adak said on Monday.

Confirming that Mr Sarkar filed a police complaint alleging threats, another police officer said the journalist started getting threats after he reported about malpractices concerning admissions to Alipurduar College.

While the Alipurduar and Jalpaiguri Press Club members alleged that Mr Sarkar was abducted by those involved in the admission racket, the opposition Left Front and the BJP pointed fingers at the ruling Trinamool Congress.

Members of the press clubs during the day took out a protest march before the police chief's office in Alipurduar demanding action against the abductors while the family members of the journalist blocked a road demanding he be immediately traced.

"The government should act and rescue Sarkar. The main culprit, a Trinamool leader, must be arrested," Mr Mishra said on a social networking site.

Left Front chairman Biman Bose said those whose interest was hurt by Mr Sarkar's report were behind his abduction.

"The administration should try to trace him in an urgent manner. It is possible that those whose interests have been hurt by the news done by the newspaper they may be behind this abduction," said Mr Bose.