The Nerve-Wracking Nandigram Fight That Kept Mamata Banerjee On Edge

Bengal Election Results: The Nandigram conundrum was said to be the reason why Mamata Banerjee, despite her assured victory in Bengal, was not coming out of her home to speak to the media and her supporters. 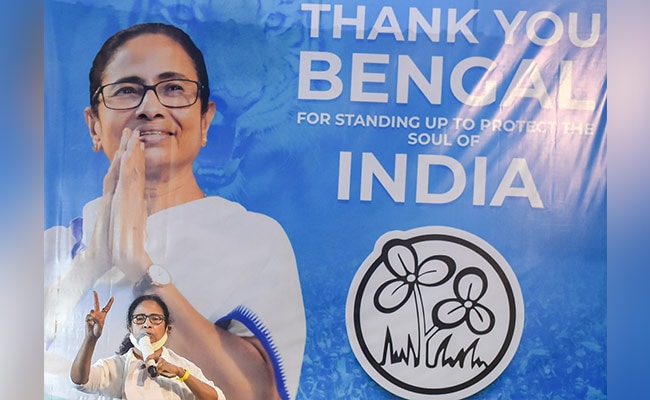 For at least six hours, Mamata Banerjee was shown as trailing Suvendu Adhikari.

Mamata Banerjee's huge victory in Bengal, even bigger than her 2016 win, has been tempered by her defeat in Nandigram, where results were declared around midnight.

After 17 rounds of counting, it was official - Mamata Banerjee's close aide-turned-BJP rival Suvendu Adhikari was the winner by a little over 1,700 votes after a day of yo-yo results.

For at least six hours, Mamata Banerjee was shown as trailing Suvendu Adhikari in round after round.

According to the final data released by the election officials, the Chief Minister trailed for the first 12 rounds. A little after 3 pm reports started emerging of Ms Banerjee taking a slim lead of 1,453 votes in Nandigram in the 13th round of voting.

Just two rounds before that, Suvendu Adhikari had been leading by almost 11,000 votes.

Around 5 pm, news agency ANI reported that Mamata Banerjee had won in Nandigram, and this was picked by many across the media.

Shortly afterwards came reports that this was inaccurate, that counting was still on and nothing was final.

The Nandigram conundrum was said to be the reason why Ms Banerjee, despite her assured victory in Bengal, was not coming out of her home to speak to the media and her supporters.

Around 5.11 pm, the Chief Minister emerged, out of her wheelchair for the first time in two months, and made some remarks, promising a detailed media chat later.

An hour later, reports suggested Nandigram was going Suvendu Adhikari's way. It was said to be the last round of counting and Ms Banerjee was lagging by 1,622 votes.

The uncertainty continued until at 6 pm, when the Chief Minister came out for her detailed response to the Bengal results, appeared to concede defeat in Nandigram.

"I accept whatever mandate comes in Nandigram. For me that is not a big thing. We win, we lose. It's ok. What matters today is that Bengal is saved, that Trinamool has been given a decisive mandate of around 220 seats. That is a big win for democracy and for Bengal and a humiliating defeat for the BJP and its kind of politics," Ms Banerjee said.

The almost-concession was nearly lost in her speech.

But then her party tweeted at 6.35 pm: "The counting process for Nandigram has not been completed. Please do not speculate."

Around 8 pm, Nr Adhikari declared his victory, attaching details of the rounds: "My sincere thanks to the great People of Nandigram for their love, trust, blessings, and support, and for choosing me as their representative and the MLA from #Nandigram. It is my never-ending commitment to be of service to them and working for their welfare. I am truly grateful!"

Yet hours later, the site still showed that Ms Banerjee was ahead. Officials said it was because of slow updates.

According to the Election Commission's data, Suvendu Adhikari was in the lead for 11 rounds, narrowly ahead of his former mentor, until in Round 12, the outcome flipped. The Chief Minister took a lead of more than 6,000 votes over her BJP rival. The gap gradually reduced in the next three rounds until in round 15, it came down to 967.

In round 16, Mr Adhikari was ahead again by 3,279 votes. In the next and last round, that difference dropped to 2556. The final figure was updated late last night, and showed that Mr Adhikari had finished 1,736 votes ahead of Ms Banerjee.

The saga of Nandigram may continue yet, even though the Election Commission rejected the Trinamool's demand for a recount.

Ms Banerjee's party suspects "something fishy" and has said it will approach the court.