Read inOther Languages
This Article is From Jun 10, 2019

The BJP has claimed that three of its workers have died in clashes at Nayjat, about 70 km from Kolkata, last evening. 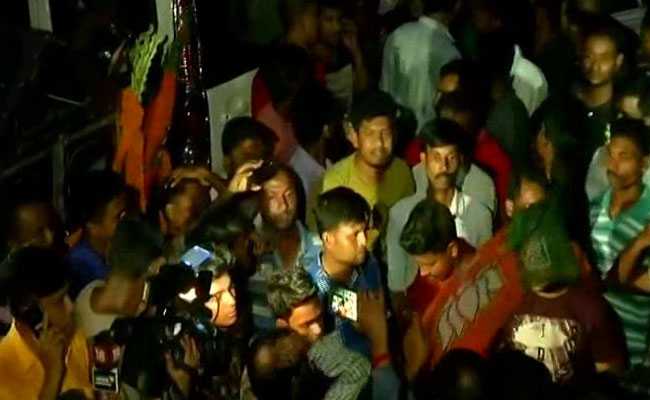 The BJP wanted to cremate the bodies of the workers who died in yesterday's clash.

Political violence in Bengal took a dramatic turn on Sunday as the state BJP, following a face-off with the police, prepared to cremate the bodies of the workers who died in Saturday's clash on the Basanti highway. Hundreds of agitated workers gathered at the spot and preparations had started for a funeral pyre. But the party reversed the decision midway, announcing a series of protests, including a statewide "Black Day".

The BJP wanted to take the bodies to Kolkata and arrange an elaborate ceremony on Monday to pay respects. But stopped by the police midway, they said they would hold the last rites on the highway.

Later, the party said it will observe a local strike and a statewide "Black Day" on June 10, and hold a rally to Lalbazar, the police headquarters, on June 12.

The BJP had claimed that three of its workers have died in clashes at Nayjat, about 70 km from Kolkata, on Saturday evening.

Workers from the two parties had come to blows over the removal of party flags from public places. A Trinamool worker was shot and then hacked to death. Two BJP workers were killed - one of them shot through the eye.

Following the state BJP's complaint to home minister Amit Shah, the centre has expressed deep concern over the continuing violence in Bengal. In an advisory to Mamata Banerjee's government, saying it had failed to maintain law and order in the state.

"The unabated violence over the past weeks appears to be a failure on the part of the law enforcement machinery of the state to maintain the rule of law and inspire confidence among people," read the home ministry's advisory to the state.

The state government responded to the advisory, saying there were only a few "stray post-poll clashes" in West Bengal and the situation in the state was "under control". State Chief Secretary Malay Kumar De wrote that "firm and appropriate actions" were initiated in all cases of violence without any delay.

Clashes between the workers of the Trinamool Congress and the BJP have been increasingly frequent as the battle for Bengal gains momentum.

In the recently-held Lok Sabha election, the BJP increased its tally from two to 18 of the state's 42 seats. Mamata Banerjee's party was marginally ahead with 22 seats. The assembly elections are just two years away.

Over the last week, at least three clashes were reported from the state, in which three men were allegedly killed -- two from the Trinamool Congress and one from the BJP.

On May 30, Ms Banerjee skipped Prime Minister Narendra Modi's oath after the BJP said they would ferry the families of its 52 murdered workers to Delhi for the ceremony.