The incident took place at a BJP meet venue in Contai in Purba Medinipur district. 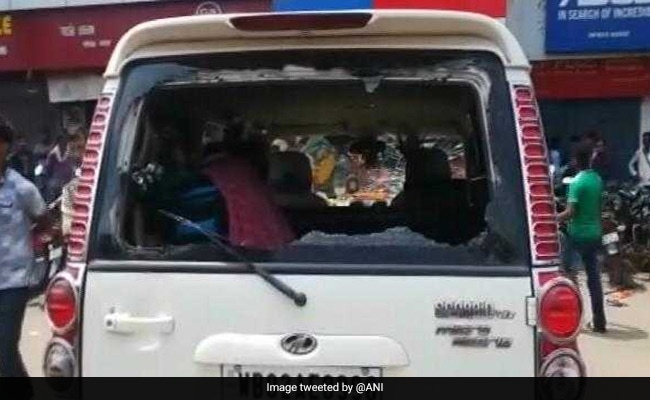 West Bengal BJP chief Dilip Ghosh's car was attacked with stones on Monday in an incident that the party blamed on the state's ruling Trinamool Congress. The Trinamool Congress, however, rejected the claim and said it was an internal fight within the BJP.

Television images showed the rear windshield of Mr Ghosh's car broken in the attack that took place at a BJP meet venue in Contai in Purba Medinipur district. Three BJP members were injured, the party said. Mr Ghosh, however, was unhurt.

The police told news agency PTI that those responsible for the attack, which took place when he arrived in the morning with a contingent of 10 to 12 cars to attend the meeting, were yet to be identified.

"Ghosh was shown black flags while entering the venue of a party meeting near Contai central bus stand. The miscreants also broke the window panes of the state BJP president's car," an officer was quoted as saying.

The police said that the situation was under control and Mr Ghosh's meeting underway as per schedule. "Policemen have been deployed in huge numbers in the area and we are looking into the situation, trying to identify the miscreants," the officer added.

"The TMC workers broke the window panes of my car and damaged 15 motorbikes that were a part of the contingent accompanying me. Three of our workers have received serious injuries in the attack", he alleged.

He alleged Mr Adhikari and police officers were present at the spot when his car was attacked by the miscreants.

The Trinamool leader, however, said the violence was due to an internal fight of the BJP and said he was nowhere near the site of the incident.

"I was passing through the area when I came to know that Ghosh was shown black flags by his own party men. The attack was the result of the saffron party's internal fight," he claimed.

The Trinamool Congress has never stopped the BJP from holding any meeting anywhere in the state, the MP said.

"It was unfortunate that the BJP president made such allegations," he added.