Watch: Bear Strays Into Maharashtra Village, Driven Away By Residents

A video footage that emerged earlier in the day showed a mob beating a hapless tigress to death near an Uttar Pradesh wildlife reserve. 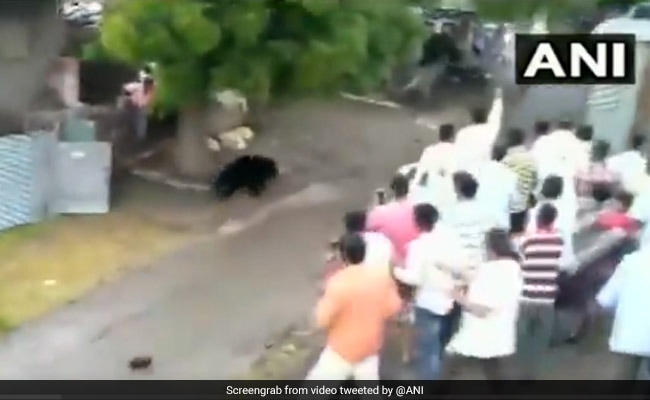 Although the villagers scared the bear away with shrieks, they did not try to harm it.

Footage of people heckling a bear in Maharashtra's Buldhana district emerged on social media today, close on the heels of another involving a tigress in Uttar Pradesh. While the big cat was clubbed to death by villagers, the bear was more fortunate. It managed to escape into the forest amid loud shrieks and hoots from onlookers.

A video posted by news agency ANI on Twitter shows the bear hiding behind a bush in Girda village even as a crowd gathers on the other side of the street yelling at it. Their shrieks rise to a crescendo as the animal emerges, then dashes behind something that looks like a pull cart. A few objects are thrown. It runs further away, and the scene cuts to the bear turning into a speck on a horizon of green. A man standing nearby is heard shouting in Marathi: "Jaavu Dyaa, Jaavu Dyaa (Let it go, let it go)."

#WATCH Maharashtra: A bear entered Girda village in Buldhana, today & escaped to the forest after being chased away by villagers. pic.twitter.com/fetGOvMzcQ

The shocking video of the tigress being beaten to death in a protected zone of Uttar Pradesh's Pilbhit Tiger Reserve, however, gave no indication that her tormentors wanted to let it go. The video, shot by a resident of Mataina village on his mobile phone the day before, has a witness giving a running commentary in the background even as the animal wriggles painfully under the villagers' blows.

The six-year-old tigress, who died of broken ribs and grave injuries, was cremated after a post-mortem examination. Local forest officials have registered a case against 31 villagers, four of whom have been arrested. The villagers claim that they attacked the tigress only after she injured a man earlier that morning.

According to reports, a forest department team that reached the spot to rescue the tigress was stopped by excited villagers. "Anyway, the tigress was in so much pain that even an attempt to tranquilise her would have only added to her misery," said Pilibhit District Magistrate Vaibhav Shrivastava.

Instances of human-animal conflict have risen in recent times amid shrinking of protected areas for wildlife. While a territorial animal like a male tiger needs an area of 60-100 sq km to call its own, what they get in Indian forest reserves is much less. Animals like bears and deer venture out into villages due to depleting food reserves in the forests, becoming easy prey for poachers and angry villagers.