Bareilly, Uttar Pradesh: The newborn, who miraculously survived the ordeal, was found by a couple and a few labourers who were there to bury their stillborn daughter.

Police in Uttar Pradesh are on the lookout for the family of a newborn girl, found inside a large earthen pot buried three feet under a cremation ground. The newborn, who miraculously survived the ordeal, was found by a couple and a few labourers who were there to bury their stillborn daughter. The couple immediately fed the newborn girl milk soaked in cotton. The girl is currently in the intensive care unit of a local hospital in Uttar Pradesh's Bareilly, where she is said to be serious.

Labourers who were digging the cremation ground at the behest of the couple, discovered the newborn after their spade hit the earthen pot. Labourers heard muffled cries from inside the pot after they removed earth from the top of the pot.

The newborn, said to be only three days old, was wearing only an inner and a legging, said Puja.

"When we were cremating our child, we found another baby girl inside a pot. She was wearing an inner and a legging. She was crying. Those who were digging the ground called the police. We immediately got a packet of milk and gave her some milk by soaking it in some cotton," Ms Puja, overcome with emotion, told NDTV. 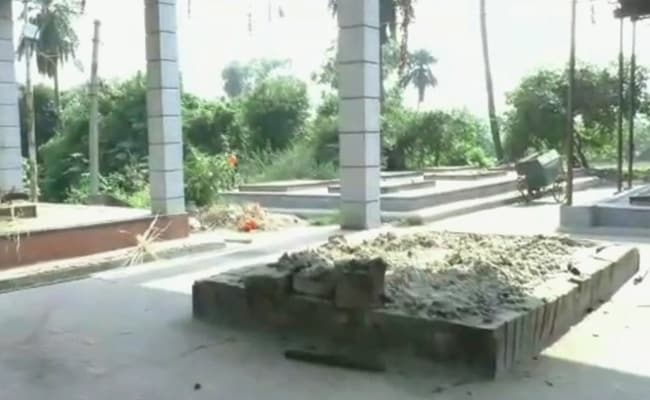 Labourers who were digging the cremation ground at the behest of the couple, discovered the newborn after their spade hit the earthen pot

A doctor also said she weighed only one kilogram, which is extremely low for a newborn. Usually, newborns weigh between 2.5 to 3.5 kg.

Police have said this was a clear case of female infanticide. A senior police officer however told NDTV that the newborn was now much better than when she was found.

"This is totally inhuman. It seems the girl was born about 2-3 days before this happened. The pot in which she was buried, broke when another pit was being dug up nearby," Abhinandan Kumar, a senior police officer in Bareilly, told NDTV.

"The girl is much better and we are finding out who her parents are. It is difficult for someone to have done this without the parents knowing," he added.