'Narendra and I': Barack Obama Writes Article on PM Modi in TIME Magazine 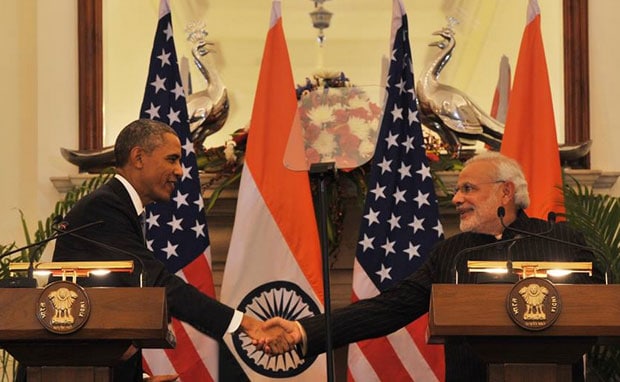 President Obama describes PM Modi's journey "from poverty to Prime Minister" as one that reflects the dynamism and potential of India's rise.

Three months after a visit to India, during which PM Modi informally addressed the US President by his first name a number of times - described by detractors as one-sided warmth - Mr Obama seems to reciprocate when he writes, "When he came to Washington, Narendra and I visited the memorial to Dr. Martin Luther King Jr."

President Obama was the chief guest at India's Republic Day celebrations in January this year, the first American president to be so. He visited on the personal invitation of PM Modi, months after the Prime Minister's visit to the US.

POTUS writes in the short note, "As a boy, Narendra Modi helped his father sell tea to support their family. Today, he's the leader of the world's largest democracy, and his life story - from poverty to Prime Minister - reflects the dynamism and potential of India's rise."

"Like India," writes President Obama, "he transcends the ancient and the modern - a devotee of yoga who connects with Indian citizens on Twitter and imagines a 'digital India'."

Recalling the visit to the Martin Luther king memorial, the US President says, "We reflected on the teachings of King and Gandhi and how the diversity of backgrounds and faiths in our countries is a strength we have to protect. Prime Minister Modi recognises that more than 1 billion Indians living and succeeding together can be an inspiring model for the world."

The US President is on that TIME list too; the article on him has been written by TIME magazine's political columnist Joe Klein. The author of Chinese premier Xi Jinping's profile is Kevin Rudd, former Prime Minister of Australia.

Other Indians who feature are ICICI Bank chief Chanda Kochchar and Vikram Patel, co-founder of the NGO Sangath and the Centre for Global Mental Health at the London School of Hygiene and Tropical Medicine.

'Agnipath': Khaps In Haryana Threaten To Socially Isolate Those Who Apply For Defence Recruitment Scheme