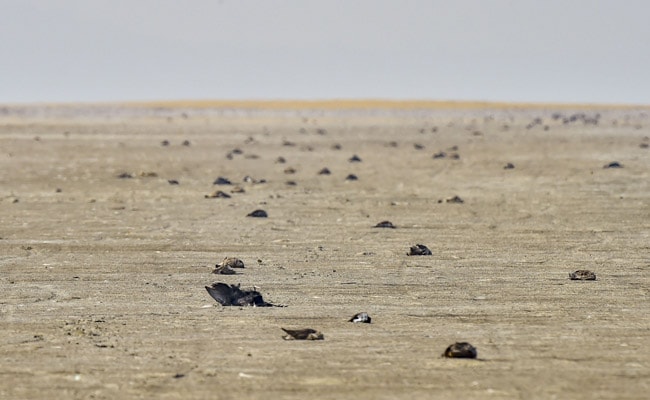 Mass death of birds occurred due to avian botulism, a report said.

Mass death of migratory birds at the Sambhar Lake in Rajasthan occurred due to avian botulism, a disease caused by a bacteria that affects nerves, a report of Bareilly's Indian Veterinary Research Institute said.

Over 17,000 birds were found dead in the past a few days in the lake area, which is known for migratory birds.

Mr Kataria said the report had proved that the steps taken by them to control the death of birds and the treatment given to them was in the right direction.

He said Chief Minister Ashok Gehlot was monitoring the situation and had held several meetings with various departments in this regard.

He had also requested Union Minister of Environment and Forests Prakash Javadekar for the further investigation of sick birds, the minister said.

Mr Kataria said so far 735 sick birds had been treated by the Animal Husbandry Department, of which 368 were alive, while 36 had been released.

Meanwhile, Chief Minister Ashok Gehlot told reporters, "Due to the steps taken by the government, the situation is no longer the same as it was before. I hope that we will soon control it."

He said that the Centre should also take the matter seriously and hold a meeting with the local authorities.

He said the state government would like to know all the reasons behind the death of the birds and ensure that such a situation did not arise in future.

During a review meeting of the Forest Department at Aranya Bhawan here on Thursday, Gehlot also stressed the need to protect forests and the wildlife.

"We need to protect rare species such as Great Indian Bustard (Godawan) and Kharmore bird to maintain the ecological balance. The state government will provide every possible resource for this," Mr Gehlot said.

He directed officials to speed up the rehabilitation of people living in areas around tiger reserves by providing them with proper package and educating them about the protection of our the wildlife.