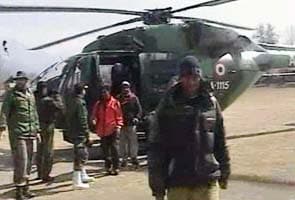 Srinagar: Nine people trapped in an avalanche on Thursday in north Kashmir's Sonamarg hill station were rescued in a joint rescue operation on Friday by the army, the air force and the civilian administration.

A statement issued on Friday morning by the provincial disaster management authority said: "Nine people trapped in an avalanche under the Shitkari Bridge in Sonamarg area were rescued today (Friday) in a joint rescue operation by the army, the air force, local police and the civil administration, with the help of locals."

"They had got trapped in the avalanche on 23rd Feb. The nine persons were airlifted in choppers of the army and the air force, using rope ladders as landing in the area was not possible," it said.

"One ALH Chopper and one Cheetah helicopter participated in the rescue. Wing Commander Vikram and Flight Lieutenant Desai flew the helicopters. The rescue started at 7 a.m. Friday," said the statement.

"The rescued persons have been shifted to Sonamarg from where they will be airlifted in a Mi-17 chopper to Ganderbal town," it said.

Aamir Ali, officer on special duty and in-charge of the divisional disaster management cell told IANS: "The rescued persons would be given medical aid before being taken back to their families."

While 13 of these died in an avalanche disaster at Dawar (Gurez) in Bandipora district, three died in the avalanche at Sonamarg hill station.

Three soldiers are still missing in the Dawar avalanche tragedy and efforts are on to trace them, a defence spokesman said.

Promoted
Listen to the latest songs, only on JioSaavn.com
Over two dozen army vehicles and 17 barracks have been destroyed in the Dawar avalanche disaster.