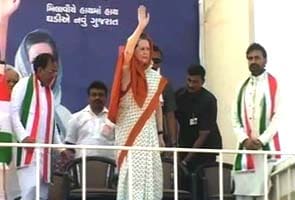 Rajkot: Sonia Gandhi is in Narendra Modi's Gujarat today. She kicked off the Congress' election campaign in the state with a rally in Rajkot's Race Course grounds. Before that she visited the Ramakrishna Ashram and garlanded a statue of Swami Vivekananda there.

Rajkot, in the Saurashtra region, is BJP territory, but the Congress hopes to exploit the fact that in this Patel stronghold BJP rebel Keshubhai Patel has begun his rival political party.

Here are the highlights of her speech: