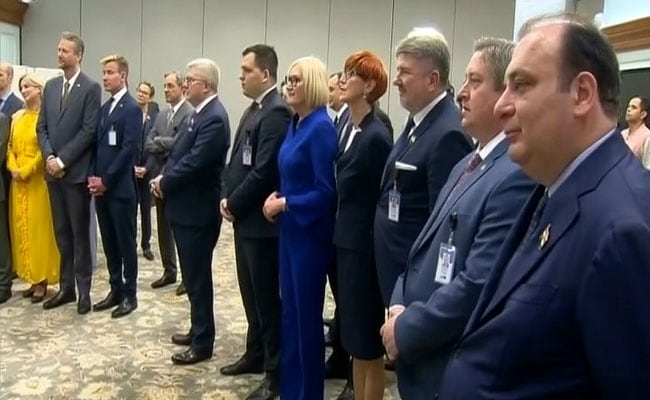 Three senior leaders from Jammu and Kashmir - one of them from the PDP and one from the Congress - were present at Monday's lunch for the lawmakers from European Union, hosted by National Security Advisor Ajit Doval. The 27 lawmakers, who are on a private visit to India, discussed the situation there with Mr Doval and Prime Minister Narendra Modi.

Sources said the three Kashmiri leaders present on the occasion included the state's former Deputy Chief Minister Muzafar Baig, a leader of Mehbooba Mufti's People's Democratic Party and Altaf Bukhari who was earlier with the PDP. Usman Majeed, who is from the Congress, was also present.

The three leaders present at today's lunch had not been on the detention list and their inclusion in such a gathering - a first since the Centre's announcement -- is seen as a search for new political faces in the Valley.

Last month, the European Parliament had discussed Jammu and Kashmir, its lawmakers had expressed both support for Centre's efforts to restore normalcy and criticism for the restrictions placed on the state.

The visit by the lawmakers - mostly from right wing parties - is a first by an international group to Jammu and Kashmir since the government ended the state's special status under Article 370 of the Constitution.

The Congress has sharply criticised the government's move to allow the European lawmakers to visit Jammu and Kashmir, pointing out that the opposition leaders here were not allowed to do so.

Late in August, Congress's Rahul Gandhi and other opposition leaders were turned away from the Srinagar airport when they tried to visit Jammu and Kashmir.

MPs from Europe are welcome to go on a guided tour of Jammu & #Kashmir while Indian MPs are banned & denied entry.

There is something very wrong with that.https://t.co/rz0jffrMhJ

Earlier, tweeting under the hashtag "#InsultToIndianDemocracy!", Congress MP Shashi Tharoor said: "My request, made during the LokSabha debate on Article 370, for an All-Party delegation of MPs to visit to see the situation for themselves, has still not been accepted. But members of the EuropeanParliament can travel as our Government's guests? What an #InsultToIndiaDemocracy!"