The Election Commission has been taking precautions at voting centres, but that's hardly of any help. 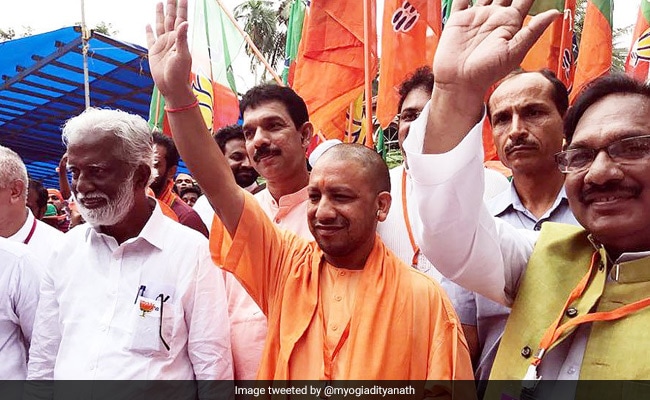 All the five poll states are facing an uphill task as far as the Covid spike is concerned.

Almost all five states now in the middle of the electoral process have seen a doubling of the number of Covid-19-positive cases over the past fortnight. Some of them, like Assam and West Bengal, saw campaigning even before the Election Commission announced the schedule on February 26. Once the dates were declares, it has been a no-holds barred outing for political parties with the Covid-19 protocol barely followed during rallies and marches. The result is that they have witnessed an over 300% increase in fresh cases in the past 14 days.

The worst affected is West Bengal, with a 378 per cent change for the worse -- the number of cases has gone up by 30,230. The state is going through a ferociously fought eight-phase election, voting for which will only end on April 27.

The Election Commission has been taking precautions at polling centres, with temperatures being gauged, hand sanitisers made available, and social distancing observed by voters. However, it is unlikely to help much as parties and leaders have barely ensured that the Covid norms are followed.

Considering the seriousness of the situation, the poll panel had said on Friday that candidates and star campaigners can be banned from holding campaign rallies if the safety rules are not followed.

"Instances of election meetings/campaigns have come to the notice of the Commission, where norms of social distancing, wearing of masks etc. have been flouted in disregard to the Commission's guidelines," the Election Commission's notice said.

The lackadaisical approach to the risks involved has been viewed across the political spectrum and states. And it may be bearing fruit now.

Assam, for instance, saw a spike to 331 per cent in the number of new cases. The State Health Minister Himanta Biswa Sarma was recently heard claiming that Assam had no Covid-19 problem and that even wearing a mask was unnecessary.

Puducherry, though a Union Territory, has witnessed similar laxity and has seen up to a 175 per cent increase in the number of case in 14 days. Tamil Nadu, too, hit a close 173 per cent increase.

Kerala, one of the worst affected states since the pandemic hit India in January 2020, has seen an 84 per cent rise in new cases during this period.

Many of the rallies and campaign meetings in these states were seen with the star campaigners or leaders not wearing masks themselves on stage and social distancing observed only in its breach.