The rhino horns will be burnt in the presence of Chief Minister Himanta Biswa Sarma at a public ground in Bokakhat - a town about 23 km from the Kaziranga National Park. 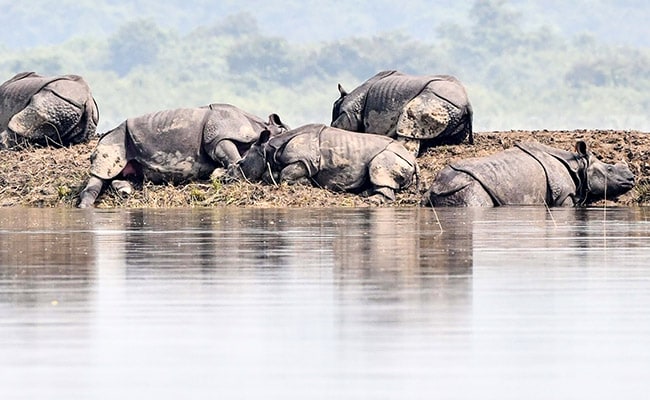 Assam will burn 2,479 rhino horns on Wednesday, September 22 as per the Wildlife (Protection) Act 1972, based on orders from the Assam cabinet. The rhino horns have been relocated to the treasury of Assam's Kaziranga National Park today, from six different state treasuries, after being examined by a high-level monitoring committee.

The rhino horns will be burnt in the presence of Chief Minister Himanta Biswa Sarma at a public ground in Bokakhat - a town about 23 km from the Kaziranga National Park. Gas-powered fireplaces have been arranged at the ground for the burning, forest officials told NDTV, adding, preparations for the public burning are currently on under the supervision of Chief Wildlife Warden of the state MK Yadav.

Although the horns of rhinoceroses are not scientifically useful, myths about their alleged medical properties are prevalent in several countries.

On September 16, the Assam cabinet had decided that in order to bust myths about the usefulness of the horns and prevent poaching, the 2,479 pieces stockpiled in the state treasuries would be burnt in public view.

The state cabinet also decided that of the total 2,623 horns examined by the high-level committee, 94 will be preserved as heritage pieces for academic purposes while 50 will be preserved for court cases. The rest - 2,479 - will be destroyed.

The other rhino horns, elephant tusks and body parts of other wild animals that the Assam Government plans to destroy under the Wildlife (Protection) Act are presently being stored in the government treasuries of various districts - Morigaon, Barpeta, Mangaldai, Guwahati, Tezpur, Nagaon, Kaziranga and Golaghat.

The decision to preserve certain horns has been taken in line with the Rhino Horn Verification Committee constituted by the state government in 2016 to study the specimens in 12 treasuries across Assam.

During the verification process, the committee had logged the world's largest horn that weighed 3.051 kg and was 36 cm in length. It was found in 1982 from a rhino in the Bagori range of the Kaziranga National Park.