Assam Polls: Last week, Prime Minister Narendra Modi and Home Minister Amit Shah were in Assam to give a boost to the BJP's campaign in the state. 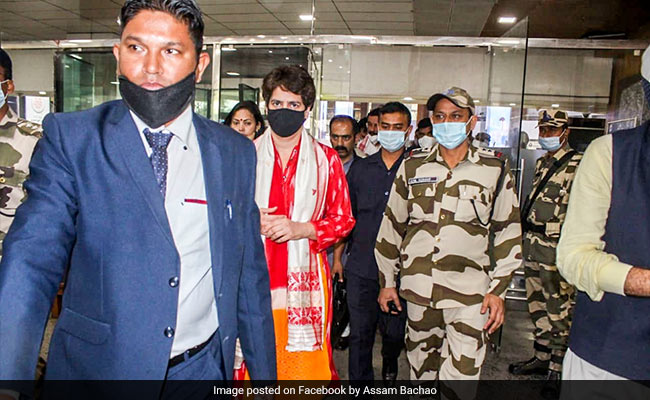 Congress leader Priyanka Gandhi Vadra reached Assam this morning to launch campaign for the three-phased state elections that begin on March 27. Guwahati is the first stop for the 49-year-old party leader as she begins her two-day visit. She will offer prayers at the Kamakhya temple on behalf of the party before she travels to Lakhimpur, about 370 km away, to launch the assembly election campaign for the Congress-led alliance.

Her visit comes after the return of Hagrama Mohilary, the chief of the Bodoland People's Front (BPF), to the Congress-fold over the weekend. The BPF -founded in 2005 - had switched allegiance to the BJP only for the 2016 Assembly election. Challenging the BJP, Hagrama Mohilary - once known as a kingmaker in Assam - on Sunday said at a press conference: "How can they (BJP) win when I am not on their side? We will have to see the exit of the BJP in Assam." He was addressing a joint press conference with Congress and other Mahajath participants units in Guwahati.

Over the last three assembly elections, the alliance that the BPF sided with has gone to win the election.

During her visit, Ms Vadra will be travelling to several districts on the north bank of the Brahmaputra river, where the BJP and its ally, the AGP, have a strong presence. visit four legislative assemblies -- Lakhimpur and Bihpuria in Lakhimpur district, Gohpur, Biswanath district headquarters and Tezpur district headquarters. She will attend party meetings, lead a protest rally and hold several public rallies.

Last week, Prime Minister Narendra Modi and Home Minister Amit Shah were in Assam to give a boost to the BJP's campaign in the state.

"Assam has everything that is enough for every Assamese. We just need to ensure that the double-engine of development that is already in place is strengthened. I assure the people of Assam that the speed of development will be increased," the Prime Minister had said last week as he inaugurated multi-crore projects in the oil and gas sector and two engineering colleges. This was his third visit to the state in the last two months.

After the event, however, the opposition Congress and its allies - Badaruddin Ajmal-led AIUDF, Anchalik Gana Morcha (AGM) and three Left parties - questioned the BJP government's "silence" on key issues such as the Citizenship Amendment Act (CAA), unemployment, the scheduled tribe status to six communities, minimum wages for tea labourers and rising prices of essentials.