Election in Assam 2021: Sarbananda Sonowal became Chief Minister of Assam after the BJP swept the north-east state in the assembly election in 2016. 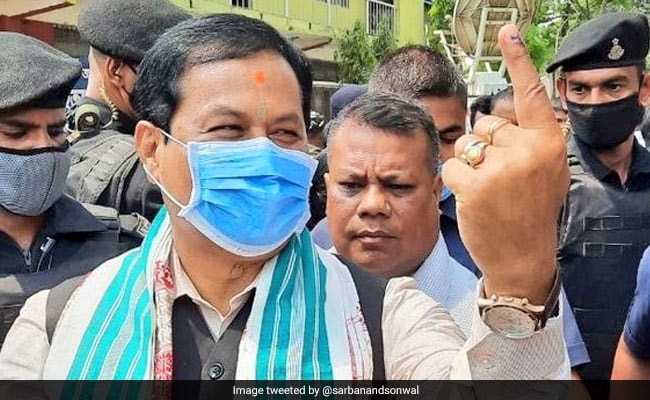 Assam Chief Minister Sarbananda Sonowal, a key candidate in the first phase of the assembly election in the state, cast his vote at a polling station in Dibrugarh.

"I prayed for peace for all...," he told reporters after offering prayers at a mazaar.

The 58-year-old, who became Chief Minister of Assam after the BJP swept the north-east state in the assembly election in 2016, is hoping to retain the Majuli assembly seat after winning from there five years ago. A reserved constituency, Majauli is one of the biggest river islands in Asia.

"We are going to win. BJP and its allies are the ones working on the ground. People of Assam now know that CAA-NRC will not affect them" Mr Sonowal was quoted as saying by news agency ANI.

When asked about the candidate for the Chief Minister's post in Assam, he said, "I am just a party worker. Ask this to the parliamentary board of the party. I am just focusing on achieving ''BJP sarkar, fir ek baar''."

Mr Sonowal left for his constituency after excersing his franchise.

Today's voting will decide the fate of 264 candidates in Assam, including Mr Sonowal and a host of ministers and opposition leaders. Other key candidates include state Congress chief Ripun Borah and Speaker Hitendranath Goswami.

Mr Sonowal's main opponent is former Assam minister Rajib Lochan Pegu of the Congress, who accuses the BJP of appropriating the work done by the previous Congress governments. Mr Pegu, a three-time winner from the high-profile constituency, was defeated by Mr Sonowal in the 2016 polls.

Mr Sonowal has not been confirmed as the BJP's chief ministerial candidate by his party. Solving Majuli's perinneal flood and erosion tops Mr Sonowal's election agenda, promise that might help him win a second term at least as an MLA if not the Chief Minister.

Polling will be conducted in Assam in three phases and the results will be declared on May 2. Voting began at 7 am and ends at 6 pm.