As Varanasi Votes, PM Narendra Modi Is Back Home In Gujarat After Hectic UP Campaign 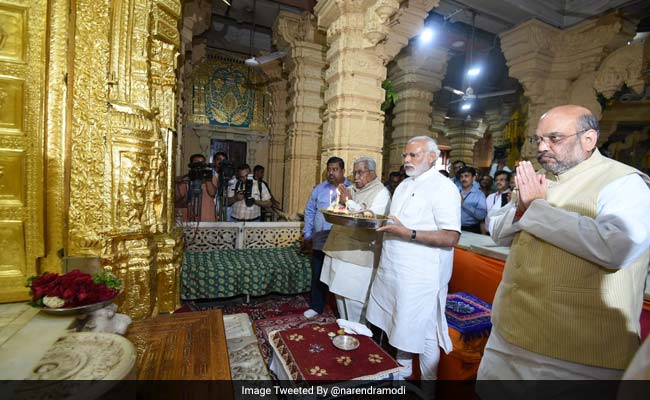 UP Election 2017: PM Narendra Modi is in Gujarat after intense campaigning in UP

Ahmedabad: As Varanasi, Prime Minister Narendra Modi's parliamentary constituency in Uttar Pradesh reported brisk voting on Wednesday morning, PM Modi was in his home state Gujarat, deep in prayer at the famous Somnath temple. With him was BJP chief Amit Shah. Both leaders are in Gujarat after a hectic campaign that saw them camped in Varanasi in a bid to secure the crucial eastern UP region for the BJP in assembly elections in the country's most populous state.

In Somnath, PM Modi and Mr Shah will attend a meeting of the temple trust of which both are members, before PM Modi returns to capital Gandhinagar to address 6,000 women sarpanch or village heads on Women's Day. Last night he was hosted for dinner by Chief Minister Vijay Rupani attended by BJP members of parliament and party legislators in Gujarat.

Just out of an intense campaign in the marathon seven-phase Uttar Pradesh election, PM Modi's visit to Gujarat is being linked to assembly elections in his home state due later this year. A massive revolt by the Patels or Patidaars in Gujarat, once a staunch support base of the BJP, has put the party on the backfoot after over two decades of ruling the state.

As Amit Shah drove up to Somnath on Monday night, Patel protesters threw eggs at his cavalcade and raised slogans against him. The Patels are angry that the BJP government has not accepted its demand for reservation in government jobs and colleges.

On Tuesday, PM Modi also announced that eight state highways will converted into national highways, inaugurated a petrochemical investors region and also the country's biggest cable bridge in Bharuch, south Gujarat.  Most of the highways are in Saurashtra, dominated by Patels.

The assembly elections in Gujarat - where PM Modi was chief minister for 13 years before he moved to Delhi after the BJP's big win in the 2014 national election - will be the next big test for the BJP after the UP elections.

The party has gone flat out to try and replicate its success in the 2014 national election when it had won 71 - 73 along with partner Apna Dal - of UP's 80 seats. Worries for it have come from western UP, where the Jats, who voted en masse for the BJP in the national election, are upset over PM Modi's notes ban and over their demand for reservation not being met.

The party has attempted to make up in eastern UP, where 40 constituencies are voting today in the seventh and last round of voting in the state, which has 403 seats in its legislature.

Promoted
Listen to the latest songs, only on JioSaavn.com
PM Modi's Varanasi has eight assembly seats - the BJP currently holds three of those, the Samajwadi Party (SP) and the Bahujan Samaj Party have two each and the Congress has one.

Votes will be counted on Saturday, March 11.