PM Modi is on a two-day visit to Uttarakhand. He was photographed meditating in a holy cave near Kedarnath. 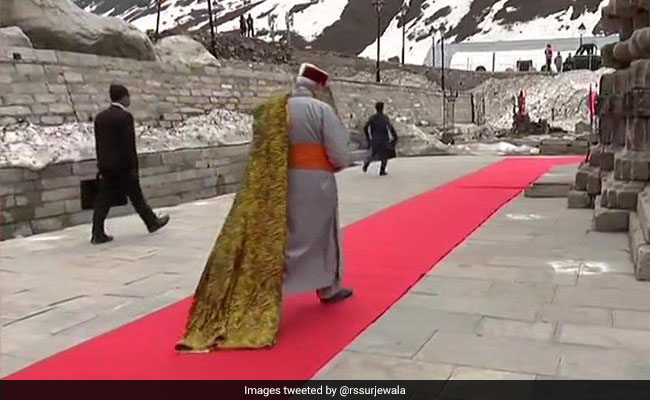 PM Modi offered his prayers at the Kedarnath temple (File)

Prime Minister Narendra Modi's visit to the Kedarnath shrine, a day before polling, has come under attack from the opposition. The onslaught was led by the Congress which slammed the Prime Minister for walking on a "red carpet" in God's abode. Other political leaders soon joined the bandwagon, mocking PM Modi for getting clicked at the shrine, one of the holiest in Hinduism.

"True devotees sacrifice their ego and arrogance before going to the abode of God, not after laying a red carpet. Modi ji, hope you know that much," Congress spokesperson Randeep Surjewala tweeted.

Aam Aadmi Party's Sanjay Singh tweeted PM Modi's picture taken as he gestured to pay obeisance to the deity. "Hail the God of Camera," he quipped, referring to the PM.

CPIM general secretary Sitaram Yechury alleged that PM Modi's visit was a violation of the model code of conduct.

"Religion is a matter of personal faith and EC has reiterated that it cannot be used for garnering votes. But Modi violates the MCC brazenly with footage of his Kedarnath religious activity over TV channels during silent period before polling. And EC continues to sleep on the job," he tweeted.

PM Modi is on a two-day visit to Uttarakhand. He was photographed meditating in a holy cave near Kedarnath. On Saturday, the prime minister also offered his prayers at the Kedarnath temple. He is set to visit the Badrinath shrine on Sunday.

In pictures shared by the BJP Uttarakhand handle on Twitter, PM Modi, 68, is seen meditating in a cave seated on a bed and propped up by a pillow. Another picture shows the prime minister folding his hands and bowing in the cave.

Polling for the seventh and last round of the national election will take place on Sunday. Under the model code of conduct, campaigning of any sort must seize 48 hours before voting starts. The counting of votes will begin on May 23.