As PM Modi Took Oath, His Mother Watched From Hundreds Of Miles Away

Even as PM Modi took oath at the glittering ceremony held hundreds of miles away, Heeraben watched the event on television from her residence at Raisan village near Gandhinagar. 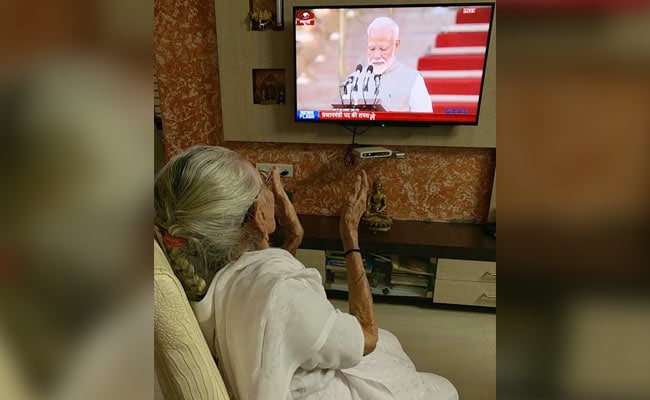 Heeraben Modi watches the event at her home in Gujarat's Raisan village. (AFP)

Thousands witnessed Prime Minister Narendra Modi's being sworn in for the second consecutive term at the Rashtrapati Bhavan this evening, but there was a face missing in the crowd. That of his 98-year-old mother Heeraben Modi.

Even as PM Modi took oath at the glittering ceremony held hundreds of miles away, Heeraben watched the event on television from her residence near Gujarat's Gandhinagar. She was seen clapping her hands in pride as President Ramnath Kovind administered the oath, making her son the head of the world's largest democracy for the second time in a row.

Despite PM Modi's busy schedule, he was able to meet his mother to seek her blessings last week. Three days after his party's massive electoral victory was announced on May 23, the Prime Minister made a trip to Raisan village -- where Heeraben lives with her younger son Pankaj Modi -- before heading to his parliamentary constituency of Varanasi.

Heeraben had cast her vote on April 23, the third phase of the Lok Sabha elections. After emerging from the polling booth, she said: "Modi sahab has done a lot for the country and he will do more."

Exactly a month later, voting results released by the Election Commission showed the BJP returning with a massive mandate. While the National Democratic Alliance won as many as 352 seats, the BJP had managed to get a simple majority on its own by snatching 303. The opposition Congress seemed all but decimated, having settled for a meagre 52 seats.

Elated, party supporters in the area rushed to Heeraben's house that evening to compliment her over her son's victory. She thanked them with folded hands, after which they surrounded and raised chants of "Har Har Modi", "Jai Jai Modi" and "Vande Mataram".

The swearing-in ceremony -- which began at 7 pm today -- is being attended by nearly 8,000 guests, including world leaders, industry heads, high-profile politicians, chief ministers, diplomats and celebrities, among others.

Karnataka Makes RTPCR Test Must For Those Coming From Maharashtra, Kerala