Tweeting under the hashtag #BJPGameOfThieves, the Congress posted: "Spoiler Alert: When you play the Game of Thieves, you either lose or you bribe!". 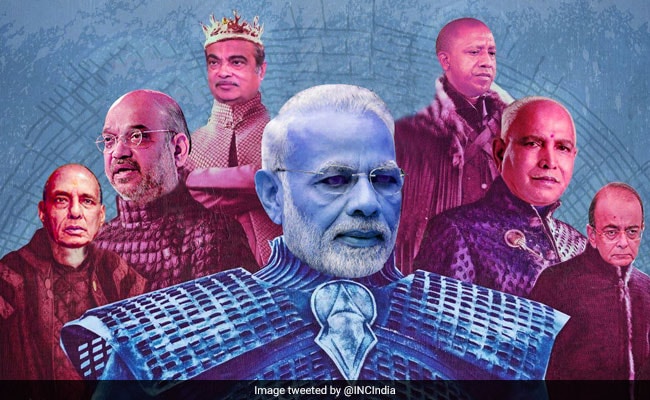 The Game of Thrones meme has PM Modi in the foreground as the Night King.

The Congress piggybacked on HBO's hit television series "Game of Thrones" - back for its highly-anticipated eighth and final season - to launch its latest attack on Prime Minister Narendra Modi and his team. The party's tweet even gave the show's tagline a spin and cast Team Modi as characters who keep the hugely popular show going.

For the uninitiated, PM Modi has been cast as the blue-eyed Night King who leads an army of the dead and is widely expected to be the opponent in the final battle.

Union minister Rajnath Singh has been depicted as Walder Fray, the character who engineered the "Red Wedding". Next up is BJP chief Amit Shah - who is seen sporting the Cersei Lannister gown. Union Minister Nitin Gadkari gets the Joffrey Baratheon crown. Karnataka BJP chief Yeddyurappa depicted as Tywin Lannister - a grizzled warrior and the Hand of the King.

Uttar Pradesh Chief Minister Yogi Adiyanath is the show's most popular character -- Jon Snow. The "The King in the North" is widely speculated to get the Iron Throne.

On the Prime Minister's right stands Finance Minister Arun Jaitley, seen in the character of Petyr Baelish. Also known as Littlefinger, he was the Master of Coins.

The viral post comes as the first episode of Season 8 was aired worldwide earlier today, stirring up fan frenzy.

The video received mixed reaction on Twitter with some demanding a Congress version of the poster.

Who deserves to be throned in 2019 people will decide:
IPL which was shifted out of India in 2009 & 2014 due to security threats, is going on smoothly alongside Lok Sabha Elections in India this year.
This tells us a lot about whose hands the country is safe in.@narendramodipic.twitter.com/DbwNWUCoG7

Where's the Congress version of this photo?

Eight years after the show begin airing, fans are still speculating who will finally sit on the Iron Throne.