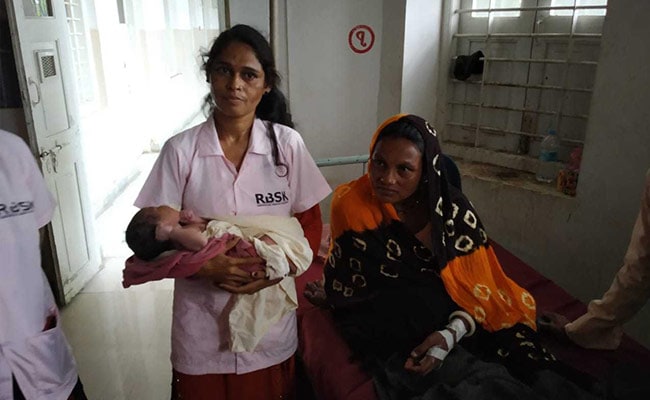 The pregnant woman was taken to a hospital in the city of Jafrabad, where she gave birth to a baby boy

As Cyclone Vayu lashed the Gujarat coast with strong winds and heavy rain today, emergency personnel reacted swiftly and decisively to ensure that two pregnant women - one in Maliya in Junagadh district, and another from the small island of Shiyal Bet -  and their babies, were safe and sound.

Members of the National Disaster Response Force's (NDRF) 5 Battalion used boats to rescue a woman living on Shiyal Bet Island and deliver her safely to a hospital in the nearby city of Jafrabad, where she gave birth to a baby boy. Shiyal Bet is a small island located approximately 700 metres off the Amreli coast of the state and 1.5 kilometres away from Pipavav port.

And in Maliya in Junagadh district, a woman gave birth inside an ambulance, assisted by medical personnel from the '108' service.

Cyclone Vayu had been due to make landfall between Porbandar and Veraval today morning. However, it changed course overnight to head further into the sea. Although the brunt of the cyclone will not hit Gujarat, heavy rains and strong winds have lashed sections of the state's coast.

"Cyclone Vayu won't hit Gujarat. It will pass nearby from Veraval, Porbandar and Dwarka. Its effect will be seen on the coastal regions as there will be heavy wind speed and heavy rain as well," Manorama Mohanty of the Met Department said in Ahmadabad.

In anticipation of the cyclone, 70 trains had been cancelled and schools and colleges along the coastline had been closed. Flight operations at several regional airports had been suspended for 24 hours.

The Gujarat government had evacuated over three lakh people from low-lying areas to safer places. The NDRF had "pre-positioned" 52 teams equipped with boats, tree-cutters and telecom equipment, according to Home Minister Amit Shah.

In addition, the Coast Guard, the Army, the Navy, the Air Force and the Border Security Force had all been put on high alert.