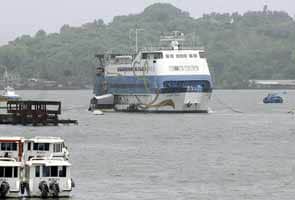 Panaji: Like many visitors to the Casino Royale Goa on a rainy Saturday night, Salim Budhwani said he does not gamble but also had no objection to the betting at the busy tables downstairs.

Despite socially conservative India's ambivalence about gambling, consultancy firm KPMG estimated that Rs 6,000 crore was wagered in the country in 2010. Much of the gambling is illegal, but attitudes are slowly changing as more Asian countries embrace gaming as a revenue generator and tourist draw.

Legal gambling in the increasingly wealthy country of 1.2 billion is limited to state lotteries, horse races and a handful of casinos. Most gambling in India, from penny-stake games at street corners and card parties in affluent homes to wagers on cricket and underground numbers games, is illicit and goes untaxed.

"People are playing on the roadside everywhere. People are playing in their houses," said Budhwani, 33, a luggage retailer from Hyderabad who had brought his family to Goa, a tourist destination and one of two Indian states with casinos.

"People are educated, they know what's at stake."

Gambling on cricket, India's most popular sport, draws hundreds of millions of dollars.

The country was transfixed last month by a scandal in which several players were accused of taking bribes from bookies, spurring calls for legalising and regulating sports betting from the Federation of Indian Chambers of Commerce and Industry, a powerful business lobby, and others.

Legislation proposed after the cricket scandal is aimed at making cheating in sports a crime although it does not address regulating or legalising betting.

"It looks like the government has at least become amenable to this discussion, which is important," said Vidushpat Singhania, a lawyer who helped draft the match-fixing legislation and favours legalising gambling.

Despite the allure of India for global operators, Indian law forbids foreign direct investment in casinos, meaning companies like Las Vegas Sands and Wynn Resorts can only tap the market by targeting Indians going overseas.

Many wealthy Indian families hold wedding parties in Macau, the world's largest gaming destination, bringing affluent guests for the festivities and the gambling.

Besides drawing thousands of visitors from India's well-heeled glitterati, some of the highest-stakes games around these events involve film stars and producers, insiders say.

For many Indians, gambling is considered propitious around the Diwali festival in October/November, with tens of millions of rupees won or lost during illicit night-long sessions of teen patti or flash, a three-card poker game.

"Indians are prone to gambling as much as the Chinese," said Rakesh Jhunjhunwala, a billionaire investor who with his wife holds a nearly 7 per cent stake in Delta Corp , owner of the Casino Royale Goa.

Inspired by Singapore's two thriving casino resorts, which opened only in 2010 but are among the most lucrative in the world, Asian countries from South Korea and the Philippines to Sri Lanka are developing similar gambling projects.

Macau is adding at least six casino resorts in the next three years at a cost of Rs 2000 crore. The Philippines is building four, while Japan is mulling gaming legislation and Taiwan is in the process of allowing casinos on offshore islands.

In Sri Lanka, Australian billionaire James Packer's Crown Ltd is close to agreement with authorities to build a Rs 2087 crore casino resort, which could be a significant draw for visitors from nearby India.

In India, gaming regulation is fragmented and sometimes contradictory, with some laws dating to the 1800s. Casinos fall under the purview of provincial governments, and just two out of 35 states and other territories have them.

Online gaming is a grey area. While it is forbidden under information technology law, it is not clear whether that applies to betting on games of skill. Many Indians bet on cricket and other sports at offshore websites, although remittances from such activity violate Indian foreign exchange rules.

Given the regulatory thicket and slow pace of policymaking in India, many industry-watchers say it will be years before gambling in India becomes a major, mainstream proposition, although a pragmatic acceptance is growing.

Michael Lobo, a hotel owner and state legislator from the Hindu-nationalist Bharatiya Janata Party that rules Goa, said he personally opposes gaming but acknowledged it helps tourism and believes it should be limited to holiday destinations and needs stronger regulation.

"In the larger interest of Goa, where tourism is concerned, we have to allow casinos," said Lobo, who favours banning Goans from casinos and earlier this year threatened a hunger strike to block the opening of India's first Playboy Club in Goa.

Jhunjhunwala said it could take roughly 15 years for casino gaming to go from niche to mainstream in India and said opposition to gaming is part of the democratic process.

"There was prohibition in Bombay once," he said, referring to a ban on alcohol in India's financial capital, now known as Mumbai. "The process of change is always, in India: opposed, consolidation, opposed, acceptance."

At the Casino Royale Goa, there is as much action on the entertainment and dining floor as at the tables. When a Russian dancer takes the stage, dozens of customers crowd forward to record her performance on cellphone cameras.

Where in most places entry to casinos is free, those in Goa have a cover charge. At the Casino Royale Goa, which floats on the Mandovi river, the Saturday night entry fee is 2,000 rupees, a hefty sum for India that deters the merely curious. Of that, 500 rupees goes to the Goa government.

Once inside the 24-hour casino, food and drinks are free, including for patrons who are not placing bets.

The crowd on a recent night included well-dressed young couples as well as families, who can drop-off their small children in the creche at the entrance level.

Promoted
Listen to the latest songs, only on JioSaavn.com
Three-card poker is also available but roulette is especially popular. "You don't have to spend much time," said 25-year-old Viral Khoda, from Belgaum, a town in the interior of India. "It's quick."