Arun Jaitley noted that while speaking at two different functions in Madhya Pradesh, Rahul Gandhi made two references to him. 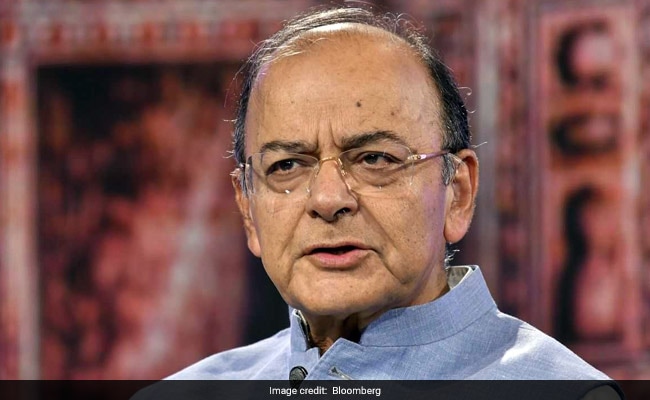 Finance Minister Arun Jaitley on Tuesday accused Congress president Rahul Gandhi of "concocting" falsehood and said he had never even seen fugitive jeweller Nirav Modi in person, let alone meeting him in parliament and helping him escape from the country.

Continuing to call Congress leader a "clown prince", Mr Jaitley in a Facebook blog, wondered if Mr Gandhi has a personality issue where "he lies a dozen times and then in self-delusion believes it to be true or is it a case of a 'Clown Prince' out-clowning himself?"

Terming Mr Gandhi's allegation that he met multi-billion PNB fraud accused Nirav Modi in parliament, the finance minister said: "I do not recollect ever having even seen Nirav Modi in my life. The question of his meeting me in parliament does not arise. If he came to Parliament, as Rahul Gandhi claims, then reception records would show that. Where have I admitted all this Mr Gandhi?"

Mr Jaitley noted that while speaking at two different functions in Madhya Pradesh on Monday, Mr Gandhi made two references to him.

In the first one, Mr Jaitley said that Mr Gandhi claimed "I have admitted that Vijay Mallya met me in parliament. He further claims I have further admitted that Mallya told me that he was escaping to London and that I helped him to escape".

With regards to Vijay Mallya, the minister said as a Member of Parliament, Mallya once chased him in the corridor of parliament to discuss his case.

"I did not pay any heed to him and coldly told him to make his proposal to the bankers. This he (Gandhi) says constitutes a meeting where he told me that he was escaping to London. Absolute lie," Mr Jaitley said.

Mr Jaitley further wrote: "How does he (Gandhi) concoct this falsehood? At the Hindustan Times Summit, he referred to a meeting he had with me and attributed same statements to me. When asked I merely said that 'I can't answer hallucinations. I am in the distinguished company of President Macron'. Today I feel it is much more than hallucinations. Is it a personality issue where he lies a dozen times and then in self-delusion believes it to be true or is it a case of a 'Clown Prince' out-clowning himself?"

On allegations made by the Congress party president on Rafale, Mr Jaitley said the aircraft and its weaponry is not being manufactured in India at all, neither by Dassault or by any other private company.

All 36 aircraft and their weapons in a fully flyable and usable form will arrive in India, he said.

After the supplies begin, Dassault has to make purchases in India for 50 per cent of the contract value.

"These supplies to Dassault are to be made by over 120 offset suppliers and which the business house named is one of them. Dassault has said that only 3 per cent of offset may come to that business house which is less than Rs 1,000 crore," the minister said.

The senior minister in the NDA government also rubbished charges made by Mr Gandhi on Goods and Services Tax and non-performing assets and loan waivers.

On Congress leader's assertion that why mobile phones are not manufactured in India, Mr Jaitley said when UPA went out of power there were only two units manufacturing mobile phones and their accessories. The number has now increased to 120 units and expanding.

Citing another example, he said Mr Gandhi has been telling his audiences why footwear is not being manufactured in the district, where he is speaking.

"Ill-informed as he is, India has become the second largest manufacturer of footwear in the world. Our exports in footwear are about Rs 20,000 crore each year. He just has to take a trip to Bahadurgarh on the outskirts of Delhi to realise the competitive nature of India's footwear industry," the minister said.