Nitish Kumar's Differences With BJP Grow With Article 370. And Yet...

Article 370 Jammu and Kashmir: Nitish Kumar has given the huge move on Kashmir a hard pass - his six lawmakers in the Rajya Sabha walked out during the discussion to indicate they reject the abolition of Article 370

Nitish Kumar and the BJP will together contest next year's election in Bihar. (File)

As the government announced that the special status for Kashmir has been done away with, several parties in parliament which are not part of the ruling BJP's coalition commended the move. Jagan Mohan Reddy's party, for example; and Mayawati's.

However, a key ally of the BJP, Nitish Kumar has given the huge move on Kashmir a hard pass - his six lawmakers in the Rajya Sabha walked out during the discussion to indicate they reject the abolition of Article 370 which made Kashmir the lone state in the country with its own constitution.

Ram Nath Thakur, a senior leader of Mr Kumar's party, the JDU, said the party has always favoured resolving Kashmir issues through negotiations. "I, on behalf of the party and our leader Nitish Kumar, want to boycott the bills brought by Home Minister with some clarifications," he said. 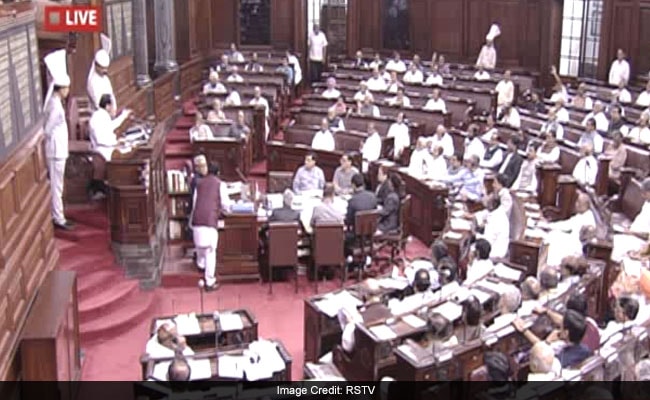 Six JDU lawmakers walked out of the Rajya Sabha to indicate they reject the abolition of Article 370.

Nitish Kumar and the BJP will together contest next year's election in Bihar; the BJP has already confirmed that Mr Kumar will be the presumptive chief minister as he runs for a sixth shot at Chief Minister of the state.

However, the partnership between the 68-year-old Mr Kumar and the BJP is regularly scarred by strong ideological differences. Notably, at a rally in Bihar ahead of the general election, Mr Kumar watched glumly, refusing to join the other leaders on stage who loudly chorused "Bharat Mata Ki Jai" as the PM chanted the slogan, faulted by critics as asserting an aggressively Hindu-first brand of nationalism.

Mr Kumar's party was in the know about its huge decision on Kashmir, suggested a minister. "We had consulted everyone," said Suresh Angadi, minister of Railways, told NDTV.

Mr Kumar has also been urging a reconsideration of the PM's decision to reject his demand for the Patna University to be designated a central university, which would entitle it to larger funds from Delhi and boost its standing. Just yesterday, Mr Kumar, a graduate of the institution, urged Vice President Venkaiah Naidu who was present at the university to help reverse the PM's decision.

"Now that you are among us, I hope something would be done to give this university its due. The state government is doing its bit. But had the Centre agreed to take it over, it would have made a world of difference," Mr Kumar said to the Vice President.

Last week, as the government pushed through the Triple Talaq bill in parliament to outlaw instant divorce by Muslim men and jail offenders, Mr Kumar's party opposed the proposal which was cleared despite the government being short of a majority in the Upper House or Rajya Sabha. "We believe that ours is a nation based on a delicate balance in respect of laws and governing principles for different religious and ethnic groups. We must not impose any view without obtaining substantive consultations," Mr. Tyagi of the JDU said at the time.

Mr Kumar's party counts Muslims among its core supporters and parties like his say that a jail term of three years for men who divorce their wives by declaring talaq three times, including over Skype or WhatsApp, needed more discussion and constitutes over-reach given that the practice of triple talaq has already been declared illegal by the Supreme Court.

The cluster of recent problems between Mr Kumar and the BJP suggests his increasing isolation within the national coalition of the ruling party; however, given the humongous numbers by which PM Modi was re-elected as Prime Minister, Mr Kumar knows that sticking with him is politically expedient. Together, their parties won 33 of Bihar's 40 seats in the general election earlier this year.

After serving as one of the BJP's oldest allies, Mr Kumar split with the party to team with the opposition in 2015. A coalition that included Lalu Prasad, the Congress and him came to power. But two years later, Mr Kumar exited the alliance because of corruption allegations against Lalu Yadav's sons, one of whom was Bihar's Deputy Chief Minister. Mr Kumar reformed an alliance with the BJP immediately to remain in power.