"Best News Of My Life": Anupam Kher Reacts To Article 370, In All-Caps 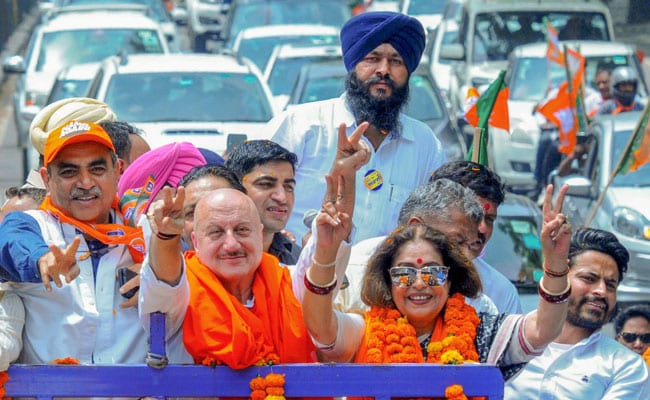 Jammu and Kashmir Article 370: Anupam Kher with wife Kirron Kher at an election rally this year

As Article 370 of the constitution which granted special status to Jammu and Kashmir was struck down on Monday, actor Anupam Kher, a loud voice in the debate over the state, on Monday tweeted that he had "woken up in New York to the best news" of his life.

Mr Kher, 64, has long been a vociferous proponent of reform in India's relationship with its northern-most state. A Kashmiri Pandit himself, he is known to have strong views about the exodus of the community triggered by violence in late 1989 and early 1990.

I HAVE WOKEN UP IN NY TO THE BEST NEWS OF MY LIFE ABOUT KASHMIR. AND ON THE DAY MY AUTOBIOGRAPHY #LessonsLifeTaughtMeUnknowingly RELEASES! WHAT BETTER GIFT LIFE STORY OF A KASHMIRI BOY COULD GET. THANK YOU GOD, #GovtOfIndia, PM @narendramodi, @AmitShah. CONGRATULATIONS INDIA.????????????????

"The entire credit for removing Article 370 and 35A goes to Prime Minister Narendra Modi and Union Home Minister Amit Shah," she wrote in Hindi.

Before the move, on Sunday night, Anupam Kher had tweeted: "Kashmir Solution has begun."

The centre on Monday moved to revoke special constitutional privileges given to Jammu and Kashmir, thereby scrapping its semi-autonomous status, and divide the Muslim-majority state into two federally administered regions.

While the government said the goal was to fully integrating the region with the rest of country and counter terrorism, opposition parties led by the Congress said it will have far-reaching political and social consequences and can trigger unrest in the state.

Home Minister Amit Shah announced in parliament the decision to scrap Article 370 as large parts of Jammu and Kashmir were in a complete security lockdown amid apprehensions that any move to abrogate the state's semi-autonomous status can trigger unrest and public backlash there.

After a cabinet meeting with Prime Minister Narendra Modi, the BJP chief told the Rajya Sabha that the "entire constitution" of India "will be applicable to Jammu and Kashmir state".

According to legal experts, this means that the state's legislature will have no power to make its own laws, thus ending the status of special powers and autonomy otherwise not applicable to other parts of the country.