India Will Give "Proportionate Response" To All Acts Of Pak Terrorism: Army Chief

General Naravane said the recent infiltration attempts by Pakistan along the Line of Control in Jammu and Kashmir showed that Pakistan is not interested in battling the coronavirus pandemic. 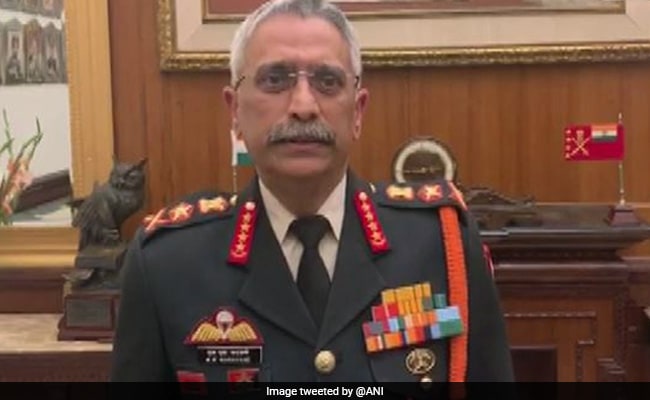 "Onus will remain with Pak to bring peace in the region, the Army Chief said. (File photo)

Army Chief General MM Naravane on Monday said India is proud of Col Ashutosh Sharma, the Commanding Officer of 21 Rashtriya Rifles battalion, and four other security personnel who laid down their lives while saving civilians from terrorists at a village in Handwara in north Kashmir.

In a warning to Pakistan, General Naravane said the Indian Army will give "proportionate response" to all acts of terrorism and infringement of ceasefire violations.

"We lost five brave officers and jawans of Indian Army and Jammu and Kashmir Police while saving civilians from terrorists at a village in Handwara. I wish to convey my heartfelt condolences and gratitude to these valiant braves," the Army Chief told PTI in an interview.

"The nation is proud of their actions especially of the Commanding Officer who led from the front and ensured that there were no civilian casualties or collateral damage during the entire operation," he said.

Apart from Colonel Ashutosh Sharma, a decorated Army officer, the others who fell to the bullets of terrorists were Major Anuj Sood, Naik Rajesh, Lance Naik Dinesh and Sub-Inspector of Jammu and Kashmir Police Sageer Ahmad Pathan alias Qazi.

"I also take this opportunity to tell the families of our brave-hearts that, we, the entire Army fraternity, is immensely proud of their gallantry and assure you that we stand in solidarity with you during this extremely difficult time," the Chief of the Army Staff said.

The operation was launched following inputs that a number of civilians were being held hostage in a house in Chanjmulla locality of Handwara. Two terrorists were killed in the operation.

The killing of Colonel Sharma was a major loss to the Army as he had led several successful anti-terror operations in the Valley in recent months. He was conferred with Sena Medal, a prestigious peace-time gallantry award, twice.

There have been frequent incidents of ceasefire violation by Pakistani side since India announced its decision to withdraw special status of Jammu and Kashmir and bifurcate the state into two union territories in August last year.

Pakistan often resorts to ceasefire violations to push militants into the Indian side. Indian troops have also been retaliating to Pakistani actions under its policy of hot pursuit.

According to official figures, Pakistani troops resorted to 3,200 instances of ceasefire violations in Jammu and Kashmir in 2019, which was the highest in the last 16 years.

Of these, 1,565 ceasefire violations took place between August and December after the India reorganised Jammu and Kashmir.

In 2018, Jammu and Kashmir recorded 2,936 instances of ceasefire violations by Pakistan.