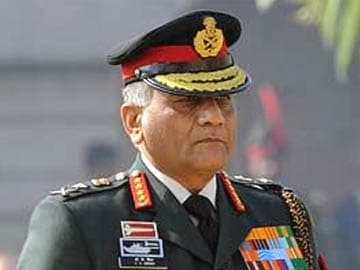 New Delhi: Army Chief General Bikram Singh today met his predecessor and Minister for Development of Northeast Region Gen (retd) V K Singh, who reportedly did not share good vibes with him, and discussed with him issues of mutual interest as the Army has substantial presence in the region.

Army sources said the Gen Singh called on him at his office and the meeting lasted for around 30 minutes.

"It was a courtesy call which also involved matters of professional interests for both of them. As V K Singh was his predecessor, Bikram Singh wanted to congratulate him. Besides, the Army has a lot of stake in the Northeast region and so they discussed matters concerning it as well," they said.

Among other issues, both discussed the matter of infrastructure development in the region which is seen imperative to improve the security situation.

VK Singh did not share a good relationship with Gen Singh and had fought a bitter row with the previous UPA government over his date of birth.

Had VK Singh succeeded in getting his date of birth changed and prolonged his tenure, Gen Singh would have missed out on the chance to become the Army chief.

Promoted
Listen to the latest songs, only on JioSaavn.com
Gen Singh later overturned some of VK Singh's decisions which included placing the then Lt Gen Dalbir Singh Suhag under a Disciplinary and Vigilance (DV) ban, paving the way for Gen Suhag to be designated as the Army chief after he retires.