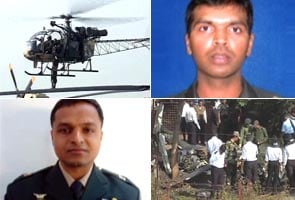 New Delhi: On Wednesday, a Cheetah helicopter of the Indian Army crashed in a civilian area in Nasik, soon after it took off from an aviation training school. Both pilots on board, young Army Majors died. One leaves behind a three-month-old daughter. The other had been married for six months.

A preliminary probe suggested a "technical snag" in the Cheetah helicopter. Did the Cheetah that crashed in Nasik then become a death trap for Major Atul Garje and Major Bhanu Chandra?

Consider these facts. The Cheetah, bought from France, was inducted into the Indian Army 40 years ago, in 1971. There are about 120 Cheetahs in service right now and most of these helicopters have been stretched beyond their lives.

The airframe life of the light-utility helicopter is about 4,500 hours, but most of the Cheetahs that the Army has have logged over 6,000 flying hours. The engine life of the chopper is 1750 hours and most have gone past that too.

At any given time, half of these helicopters are AOG (aircraft on ground) or grounded. Supply of spares is a major problem too.

Promoted
Listen to the latest songs, only on JioSaavn.com
Worse. While the Nasik crash is a jolt and brings focus back on the precarious condition of the choppers, in the Siachen glacier Cheetahs, which have a flying ceiling of 17,000 feet, routinely fly at over 20,000 feet, risking both man and machine.

Almost four years ago, in March 2007, Defence Minister AK Antony had told Parliament that the aging Cheetah fleet would be replaced soon. There has been one cancelled tender since then, some fresh trials, but no decision. In these four years, eight pilots have been killed in Cheetah crashes.