Another ceasefire violation by Pakistan at LoC; third in single day 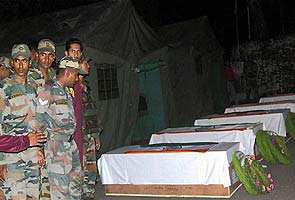 The bodies of the five Indian soldiers, who were killed earlier this week

Srinagar: Less than a week after killing five Indian soldiers in an ambush at the Line of Control in Jammu and Kashmir, Pakistan has violated the ceasefire agreement thrice in the last 24 hours.

The latest incident has been reported near the Durga sector in Poonch. Several posts of the Indian Army have been targeted by Pakistani soldiers; the firing is still on.

The first violation by Pakistan today occurred in the Kanachak sector of the Kashmir Valley. A jawan from the Border Security Force (BSF) was injured in the incident.

"There was sniper firing from Pakistani side this morning along the international border (IB) at Alfa Machial Border Out Post (BOP) area in Jammu frontier," a senior BSF officer said.

Yesterday, both sides had exchanged fire for around seven hours.

"Pakistan fired over 7000 rounds of heavy ammunition besides mortar shells on Indian posts during the seven-and-a-half-hour firing in Poonch," a Defence spokesperson said yesterday, adding that it was "biggest ceasefire violation" in recent times. No causalities were however reported.

On the intervening night between Monday and Tuesday, Pakistani troops ambushed a patrol party of the Indian Army, killing five soldiers, and injuring a sixth one in the Poonch sector, 200 km south of Srinagar.

At a rally in Delhi's Ramlila grounds today, BJP president Rajnath Singh urged the government to take appropriate steps and suspend all talks with Pakistan.

Promoted
Listen to the latest songs, only on JioSaavn.com
"Pakistan has crossed all limits. The attacks at the Line of Control can be prevented if the government takes the right steps. The Prime Minister should announce no talks will take place with Pakistan," Mr Singh said today.

The killing of the soldiers created a huge uproar in Parliament with Defence Minister AK Antony, in a second statement, stating the attacks were carried out by specialised troops from Pakistan. His first statement absolved the Pakistani army, saying the attack was carried out by militants. His statement was in contradiction with the one issued by the Defence Ministry, leading to widespread criticism, especially by the BJP.