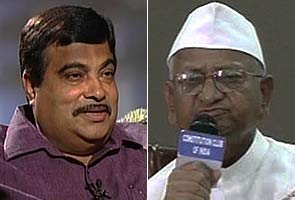 New Delhi: With the confrontation between Anna Hazare and the government reaching a crescendo with the former's detention and subsequent arrest today ahead of his second indefinite fast, the Opposition is now mulling its options to corner the government over what is fast becoming a major political issue.

The National Democratic Alliance (NDA) led by the Bharatiya Janata Party (BJP) will meet today to work out a clear strategy to take on the government over Mr Hazare and the Lokpal Bill.

The NDA may raise the issue of denial of civil rights, especially after the 74-year-old Gandhian was denied permission by the Delhi Police to go ahead with his fast.

With his arrest today, the Opposition could also attack the government for trying to suppress voices against corruption. Mr Hazare along with other civil society activists has been demanding a tougher Jan Lokpal Bill (Citizens' Ombudsman Bill) to tackle corruption in public places. Team Anna, as they are known, has also been pressing for the inclusion of the Prime Minister under the ambit of the Lokpal. The government though didn't pay heed to their suggestions as it excluded the PM in its version of the Bill that was introduced in the Parliament on August 4.

The NDA could again raise the demand for the PM's inclusion in the controversial Bill.

Promoted
Listen to the latest songs, only on JioSaavn.com
The Opposition's plan to target the government over the ongoing crisis was also reflected in BJP president Nitin Gadkari's statement who told NDTV that his party could consider joining Mr Hazare's fast if the latter invited them to do so. (Watch)

The government's current confrontation with Team Anna over the Lokpal Bill has just provided further ammunition to a belligerent Opposition which has been targeting the Centre over a slew of corruption cases.