People from a remote Andhra Pradesh village carry a pregnant woman on a cot to the nearest community healthcare centre in Vizianagaram district, appeal to Chief Minister YS Jaganmohan Reddy for roads. 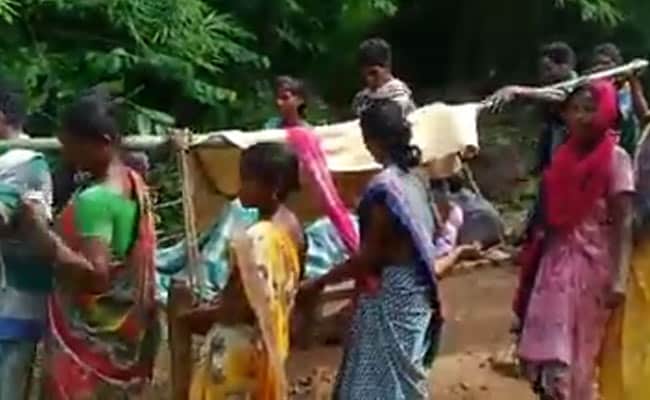 Andhra Pradesh: A pregnant woman was carried 10km on a cot so she could be taken to a hospital.

In the absence of a road, a pregnant woman was carried on a cot for 10 kilometres from a remote village in Andhra Pradesh to a point from where an ambulance was to take her to the hospital. The ambulance never arrived, so the woman was taken in an autorickshaw.

Striking visuals shared widely online show several men and woman carrying Kasturi Demudamma down a rough stretch near their poorly connected village in Vizianagaram district - some 70 km away from Vishakhapatnam. A woman tearfully appeals on camera to Chief Minister YS Jaganmohan Reddy for a road.

"Jaganna (Jaganmohan Reddy) please do something for us," the woman cries as she helps carry the cot.

According to a senior health official, Kasturi Demudamma delivered her baby at a government general hospital. The mother and baby are safe, she said.

"Having road connectivity would really help improve the reach of healthcare facilities in remote tribal villages. There can be more institutional deliveries, reducing maternal and infant mortality rates," the official told NDTV.

The incident comes two weeks after a similar case reported from Vishakhapatnam underlined the lack of road connectivity in the state's remote villages.

A 21-year-old pregnant woman had to be carried two kilometres on a makeshift stretcher to another village which has a road. From there, an ambulance picked her up to take her to the nearest hospital.

Members of the village panchayat complained that nothing had changed for them for decades despite changing governments and politicians. Such cases keep happening in many villages, when will our lives change, they had said.