YS Sharmila was on a march, along with her supporters, in Warangal, when a clash broke out between her supporters and party workers of Telangana Rashtra Samithi 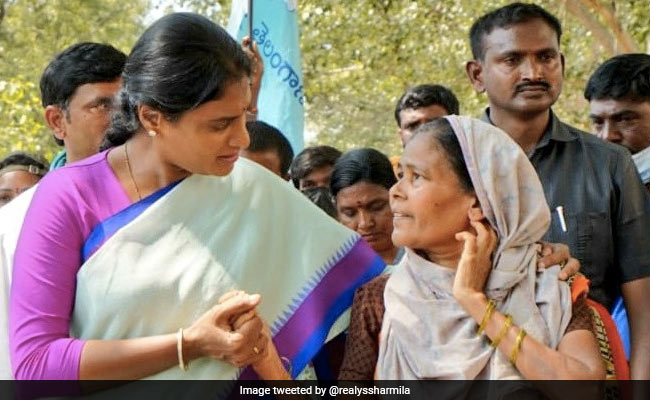 YS Sharmila, the sister of Andhra Pradesh Chief Minister YS Jagan Mohan Reddy, was arrested today, following a clash between her supporters and workers of the Telangana Rashtra Samithi (TRS) in Warangal district of Telangana.

Ms Sharmila was on a march, along with her supporters, when the fight broke out.

She was heard saying: "Why are you arresting me. I am the victim here."

Ms Sharmila, who had launched YSR Telangana Party (YSRTP), has been on a 'padyatra' since October last year. She has so far covered 3,500km.

She was in Narsampet yesterday, where she criticised local TRS MLA Peddi Sudarshan Reddy.

Her comments reportedly angered cadres from Chief Minister K Chandrashekar Rao's (KCR) party, who attacked the vehicle in which Ms Sharmila has been travelling during her 'padyatra' and set it on fire. This reportedly angered her supporters and a fight ensued between them and the TRS party workers.

"Why are you arresting me? I am the victim, not the accused here," Ms Sharmila was heard shouting when she, along with her supporters, were being taken away by the police.

While Ms Sharmila's 'padyatra' has generated a lot of political tension between YSRTP and ruling TRS, another proposed 'padyatra', by state BJP president Bandi Sanjay Kumar, got mired in controversy, with Telangana Police denying permission for a public meeting as part of the 'padyatra' in Bhainsa, which the police said is communally sensitive.

Bandi Sanjay went to the Telangana High Court, which ruled that he cannot enter Bhainsa, but can go ahead with his foot march, in which he plans to cover 222km over three parliamentary and eight assembly segments over the next 20 days.

Telangana BJP, while criticising the government, has demanded an immediate grant of permission for the march.

After the court ruling, Bandi Sanjay started his march with a puja at Pochamma temple in Nirmal district and announced that the public meeting would happen tomorrow, just 3km outside Bhainsa, following court orders, with Union minister Kishan Reddy as chief guest.

Assembly elections in Telangana are just about a year away and in the run-up to it, the constant sparring between the TRS and BJP is only expected to get sharper.

Analysts say the presence of parties like YSRTP, that criticises KCR and the TRS, may help the ruling party by dividing the anti-TRS vote.