"I found television to be an effective way to spread the message of cleanliness," the Bollywood superstar said. 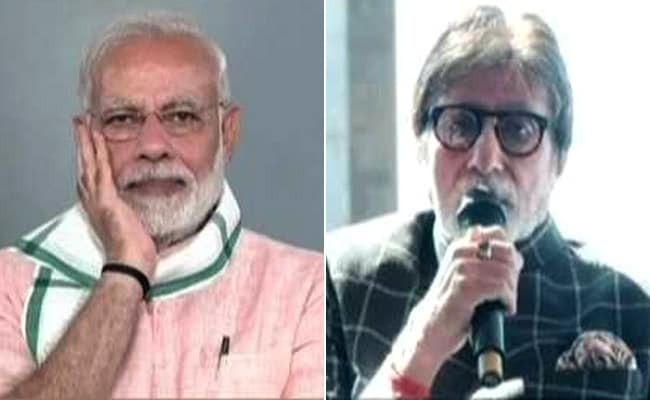 Amitabh Bachchan with PM Modi during the launch of the 'Swachhata Hi Seva Movement' via his NaMo App.

Bollywood superstar Amitabh Bachchan while interacting with Prime Minister Narendra Modi today said that he found TV to be an "effective way to spread the message of cleanliness".

"Four years ago, you (Modi) introduced the nation to the Swachh Bharat Mission. I too decided to get involved as a citizen of India. I have been associated with various cleanliness campaigns including the campaign to clean the Versova beach in Mumbai," Mr Bachchan said to PM Modi during the launch of the 'Swachhata Hi Seva Movement' via his NaMo App.

"Whatever garbage people threw in the sea, the sea gave it back to people and it was visible on the beach. When I went to participate in the cleanliness drive, I found that we have to dig the sand to bring out the garbage. People there then demanded for a machine to bring out the garbage from the sand and a tractor to dump the waste away from the beach, which I provided to them."

"I found television to be an effective way to spread the message of cleanliness," the Bollywood superstar said.

Mr Bachchan further added, that "he realised that what people should do is focus on ensuring their immediate surroundings are clean".

"We were involved with a 'Cleanathon' with a television news channel. Chief Minister of Maharashtra Devendra Fadnavis and I went to hospitals with the message of Swachhata (cleaniness)," he said.

The Prime Minister was also joined by industry titan Ratan Tata in the interaction streamed live on the app.

Interacting with the Prime Minister, Mr Tata said: "Its a great honour and privilege to help launch a movement which should be the dream of every citizen of India. "To be a strong India, the foundation has to be strong and that foundation is the health of our people."

He also said that the Tata Trusts are actively supporting the Swachh Bharat Mission and it has spent over Rs. 100 crore in the last four years to support the Clean India mission.

"Our support will continue in the years to come especially in bringing more technology in ensuring a clean India. And I congratulate you for a courageous move in the form of Swachh Bharat Mission. We are no longer taking the health of our people for granted. We are devoting manpower for a strong India and focussing on healthcare," he said.

Mr Tata also emphasised that health of our people cannot be there without sanitation and cleanliness. "We can reduce and eliminate several diseases if we support the Swachh Bharat Movement."

Prime Minister Modi then said that he firmly believes that the private sector has a big role to play in creating a Clean India. "Together, we shall all achieve the Swachh Bharat of Bapu's dreams," he said.