Tamil Nadu Assembly Polls: The "mothers and sisters" of the state should teach a ''lesson'' to the DMK in the April 6 Assembly polls by defeating it, Amit Shah said. 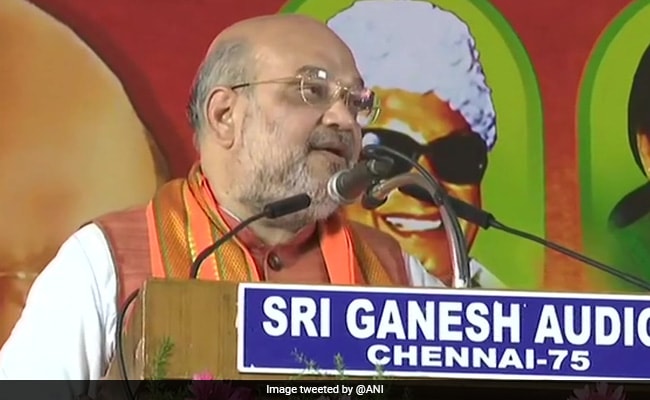 The "mothers and sisters" of the state should teach a lesson, Amit Shah said.

Union Home Minister Amit Shah on Thursday hit out at the Dravida Munnetra Kazhagam (DMK) over its leader A Raja's alleged vulgar remarks against Tamil Nadu Chief Minister K Palaniswami's mother, saying it showed the party had no regard for women.

The "mothers and sisters" of the state should teach a ''lesson'' to the DMK in the April 6 Assembly polls by defeating it, he said.

Addressing an election rally, Mr Shah canvassed votes for NDA candidates -- those from the AIADMK, BJP and the PMK, even as he charged the DMK with aiming to win easily in the polls by ''hook or crook.''

"I saw the statement by DMK leader A Raja. The kind of statement he made against a deceased woman. I think they (DMK) have no regard for women and want to win this election by hook or crook," he said.

"In the past, DMK made such bad remarks against (the late Chief Minister) Jayalalithaa ji. I appeal to the mothers and sisters of Tamil Nadu-- teach a lesson to the anti-women DMK in the polls by defeating it," the BJP veteran said.

The electoral battle was between the NDA which was walking the path of development and the UPA which was into corruption and dynasty, he said.

Both the parties (DMK, Congress) were not bothered about the people of Tamil Nadu, Mr Shah claimed.

The Election Commission, Mr Shah said, has chosen April 6 as the polling day in Tamil Nadu and it coincided with the BJP's Foundation Day and therefore the NDA will win the polls, he said.

He described Mr Palaniswami as a "son of the soil" and a farmer and praised both the chief minister and his deputy O Panneerselvam for protecting the people of the state against coronavirus.

"On the other side, the DMK and Congress are not bothered about the people of Tamil Nadu," he said.

"We all know DMK and Congress party well. DMK and Congress mean corruption, rowdyism, land encroachment and furthering the interests of their sons and daughters and not bothered about people," Mr Shah alleged.

On the other hand, the NDA, under Prime Minister Narendra Modi's leadership, was concerned about the welfare of Tamil Nadu and was walking in the path of late chief minister MG Ramachandran and J Jayalalithaa, he said.

In fact, the credit for all pro-poor programmes in the country should go to Mr Ramachandran, fondly addressed as MGR, he said.

It was in his honour, that the Chennai Central Railway Station was earlier named after MGR by PM Modi, Mr Shah said, adding the AIADMK founder is the "true Makkal thilagam" (People's leader).

Under the Prime Minister's leadership, Mr Palaniswami and Mr Panneerselvam were also taking the state foward in the path of development, he said.

They had done a lot for Tamil Nadu in the past five years, including loan waivers, launch of the subsidised two-wheeler scheme for women, launched by PM Modi earlier and other schemes, he said.

"DMK is no more a political party (but) unofficially a business organisation," he alleged.

Lashing out at the DMK and Congress over the bull taming sport jallikattu, Mr Shah said "it is Rahul Gandhi who had announced banning jallikattu in 2016," in an apparent reference to the TNCC's assembly poll promise then.

Had the party come to power, jallikattu would have been banned--it did not happen so due to the blessings of Lord Muruga, he said.

Stating that PM Modi had great love for Tamil language and the people of the state, Mr Shah said the Prime Minister has quoted from Tamil verses during his speeches abroad.

PM Modi "has done a lot of work for Tamil Nadu," and the centre had allocated Rs 1 lakh crore for roads in Tamil Nadu in this budget, besides providing Rs 63,000 crore for Chennai metro phase II. Defence corridor and AIIMS in Madurai are the other initiatives aims at benefiting Tamil Nadu, he said.

No one had thought about Tamil Nadu fishermen like PM Modi, Mr Shah said, while citing the PM's Jaffna visit in 2015 to meet the Sri Lankan Tamils there. "He gave houses to thousands of Tamil brothers," he said.

Many temples in Jaffna were being renovated with Indian assistance, Mr Shah said.

"The corrupt DMK and Congress party cannot ensure Tamil Nadu's growth. Under Modi's leadership, with Palaniswami and Panneerselvam, only the NDA can do so."

Later in the day, Mr Shah participated in a road show at Velayudampalayam to canvass votes for the party's BJP candidate from Aravakurichi in Karur, K Annamalai and travelled in an open top van.

In his address, he said there were two choices before Tamil Nadu--the "corrupt DMK and Congress on one side" and on the other side it was the PM-led NDA "which is fighting the polls for Tamil Nadu's development."

"Do you want development of Tamil Nadu or Udhayanidhi? The time has come that the footsteps of great MGR and Jayalalithaa be followed for the state's growth. And only the AIADMK and BJP can do this and no one else," he said.

"Reject the corrupt and Tamil Nadu will become one of the most developed states in the country," Mr Shah said.