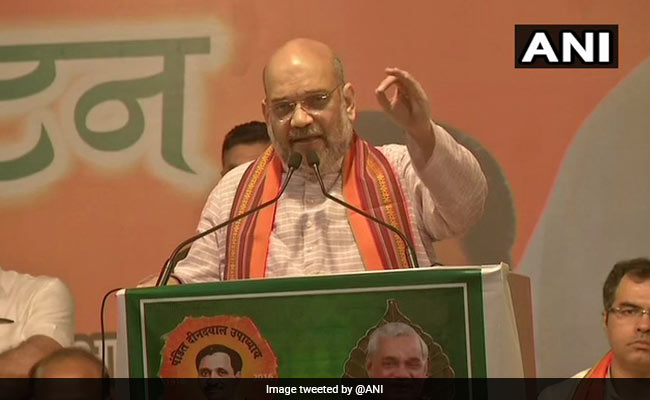 "They (AAP government) excused from implementing (health insurance scheme) Ayushman Bharat saying Mohalla Clinics can take care of health needs of people. I want to ask Kejriwal if cancer treatment and heart transplant can be done there. He himself should get treatment from Mohalla Clinics to know their realities," Mr Shah said.

The BJP president charged the Kejriwal government with blocking development of Delhi on "political" grounds.

"The Government of India sent them reminder after reminder but they did not implement Ayushman Bharat. Arvind Kejriwal feared it will enhance PM Modi's popularity," he said.

Mr Shah called upon party workers to go to people and tell them how the Kejriwal government deprived them of Ayushman Bharat scheme's benefits.

"People will set the account right in 2019, Kejriwal-ji. You should not blame EVMs (electronic voting machines) then," he said.

Claiming that Mr Kejriwal's support base among people of Delhi has "declined", the BJP chief said it was now "nothing" since the party stormed to power by a massive victory in the 2015 assembly election.

Mr Shah also attacked Congress president Rahul Gandhi and Mr Kejriwal, saying they felt pain on issues such as implementation of National Register of Citizens (NRC) in Assam and action against Maoists in the country.

"They are pained when we take action to expel illegal immigrants and against Naxal and Maoist elements. But we are pained when anti-India slogans are raised in the country," he said.

Mr Shah asserted that the BJP would ensure after the 2019 parliamentary election that "every single" illegal immigrant is expelled from the country.

The BJP chief appealed to party leaders and workers to ensure that the party retains all the seven Lok Sabha seats in Delhi.