Home Minister Amit Shah criticized the Congress for questioning Prime Minister Narendra Modi for the he did for the region, saying that the Congess won't be able to see development if it keeps its eyes closed. 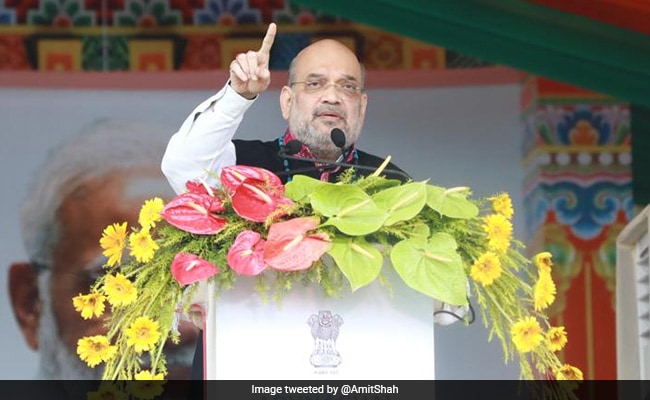 Home Minister said that a three-pronged agenda has been prepared for the development of the Northeast.

Union Home Minister Amit Shah today claimed that the BJP has ended the "culture of corruption" in the Northeast and funds meant for development work now get percolated to the last man, while middlemen siphoned off most of the amount during Congress rule.

He said that the region had remained neglected during 50 years of Congress rule and asserted that it came on the fast track of development only after Prime Minister Narendra Modi came to power in 2014.

Addressing a public rally in Namsai district, Mr Shah criticized the Congress for questioning Prime Minister Narendra Modi on what he did for the region, saying that the grand old party won't be able to see development if it keeps its eyes closed.

"Rahul Gandhi, open your eyes and discard Italian glasses and wear Indian ones. Then only, you could see what development Prime Minister Modi has brought to the region, which your party failed to do in 50 years," he said.

"Development funds for the region were siphoned off by middlemen during the Congress rule. But with the NDA under the leadership of Prime Minister Modi coming to power in 2014, the culture of corruption has ended and every single penny is being utilised with utter transparency. The prime minister has ensured that development funds get percolated down to the last man," Mr Shah said.

He claimed that the Northeast was earlier known for militancy due to faulty policies of the previous government but now peace prevails as the Centre has signed peace deals with most of the insurgent outfits.

"As many as 9,600 militants in the region have surrendered and joined the mainstream in the last eight years. Youths of the Northeast are no longer interested in gun culture and are now launching start-ups. The Centre is committed to bringing peace and development to the region," Home Minister Amit Shah said.

Referring to the decades-old boundary dispute between Arunachal Pradesh and Assam, the Home Minister complimented the chief ministers of the two states for starting the process in the right earnest.

"Chief Ministers Pema Khandu and Himanta Biswa Sharma are working meticulously to resolve the issue amicably and I am sure it will be resolved soon," he said.

Arunachal Pradesh, which was carved out of Assam, was initially a Union territory. It became a full-fledged state in 1987. The two states share an 804.1-km-long border. The boundary issue, which originated during the reorganisation of the northeastern states, is now pending in the Supreme Court.

The Union Home Minister said that a three-pronged agenda has been prepared for the development of the Northeast.

"Our first aim is to not only save the dialects, languages, traditional dance, music and food of the Northeast, but also enrich them and make them the pride of the nation," he said.

The second aim is to end all disputes, providing a platform to the youth of the region through which they can compete with the youth of the world and it is our responsibility to create such a dispute-free, peaceful, extremist-free, weapon-free Northeast.

"The third goal is to take all the eight states of the region to the top position in the list of the most developed states of the country," he said.

Earlier in the day, Mr Shah accompanied by Union Law and Justice Minister Kiren Rijiju, Chief Minister Khandu and his deputy Chowna Mein offered prayers at the Golden Pagoda at Tengapani near here.