Amit Shah: Kashmir On Way To Development After Article 370 Revocation

The move had also led to terrorists starting to count their final days, he claimed while addressing a gathering in Ahmedabad. 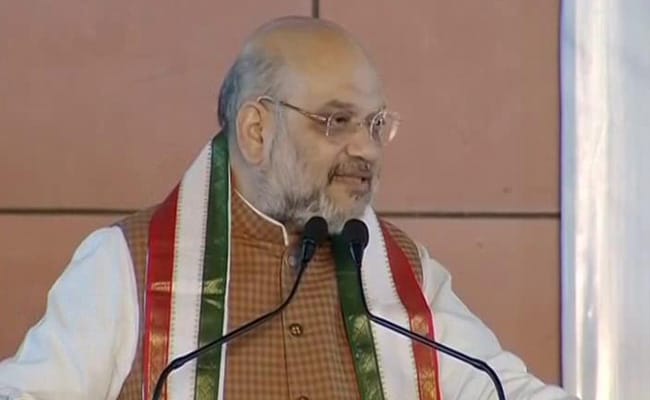 Amit Shah on Saturday reiterated "not a single bullet has been fired nor a death reported in Kashmir".

With less than a week for the Jammu and Kashmir Reorganisation Act, 2019, to take effect, Union Home Minister Amit Shah on Saturday reiterated "not a single bullet has been fired nor a death reported in Kashmir" since the abrogation of Article 370 in the restive region.

The move had also led to terrorists starting to count their final days, he claimed while addressing a gathering in Ahmedabad.

"I would like to assure you the removal of (Articles) 370 and 35 (A) has paved the way for Kashmir's development. And with this, terrorists in Kashmir have started counting their final days.

"Congress leaders said in Parliament there will be bloodshed. I would like to tell them, nothing has happened. Neither a bullet has been fired, nor a death reported. Kashmir is peacefully on its path to development," he said.

He said removal of Article 370 and 35 (A) had helped Kashmir forever unite with India, and the move was a way to fulfill dream of late Sardar Patel, the first Home Minister of India.

He said Sardar Patel united princely states into the Union but Kashmir got left out, and Prime Minister Narendra Modi, in his second term, revoked these articles to complete the dream.

"On August 5 and 6, Narendra bhai removed Articles 370 and 35A and forever united Kashmir with India," he said. Mr Shah went to claim that the 182-metre tall Statue of Unity, in Gujarat's Kevadiya, was a way to set right "70 years of insult of the Iron Man of India".

"When one views the towering statue of Sardar Patel in Kevadiya, one realises how the insult meted out to Sardar saheb for seventy years has been returned with interest. Today Statue of Unity has become a spot in the country where the largest number of tourists visit," he said.

Mr Shah said PM Modi would be visiting the memorial again to administer a pledge of unity.

Heaping praise on the Prime Minister for the surgical and air strikes against Pakistan-backed terror camps, the BJP chief said these acts were to avenge jawans who had fallen to terror bullets as well as to protect the country's borders.

Mr Modi had made the world realise the importance of the "opinion of the Indian Prime Minister", Mr Shah asserted. The BJP chief was in Ahmedabad and nearby Sanand to inaugurate and lay foundation stones for various development projects and distribute benefits of Pradhan Mantri Awas Yojana and Vidhava Yojana to beneficiaries in areas falling in his Gandhinagar Lok Sabha constituency.

On Saturday, he inaugurated and laid the foundation stones for around Rs 800-crore worth of projects of Ahmedabad Municipal Corporation and Ahmedabad Urban Development Authority.

In Sanand town, he inaugurated and laid the foundation stones for projects worth around Rs 78 crore, including that of lake development, construction of state roads and the installation of CCTVs among others. As many as 5,532 widows were distributed benefits of pension scheme while 172 families were allotted houses under the PMAY.

Attacking the Congress, Mr Shah said "those who ruled the country for 70 years could not provide these basic facilities (health, cylinder, toilets, houses) to the people".

"In 2014, the people of the country decided for a change and a full majority government of the BJP was formed. Narendra bhai became PM of the country, and within five years, Mr Modi and the BJP government ensured these facilities were provided," he said, mentioning schemes like Ayushman Bharat, toilets, LPG gas cylinders under Ujjwala etc.

"The opposition criticises us, which I welcome, but I would like to ask them why, despite four generations ruling this nation, they failed to provide amenities to people," he said.

The Congress made fun of toilets as a parameter of development because those born with silver spoons in their mouths cannot understand the pain in a poor household without toilets, gas cylinders etc, Mr Shah said.

"Narendra bhai was born and brought up in a poor family, so he understood the pain of the poor since childhood. That is why 60 crore poor people got houses, gas and power connections, toilets and health facilities," Mr Shah said.

The J&K Reorganisation Act, which contains provisions to divide the state into two UTs, will come into effect October 31.