Amit Shah's West Bengal seminar on NRC comes at a time when there have been 11 deaths in the state allegedly due to panic over implementation of NRC in Bengal. 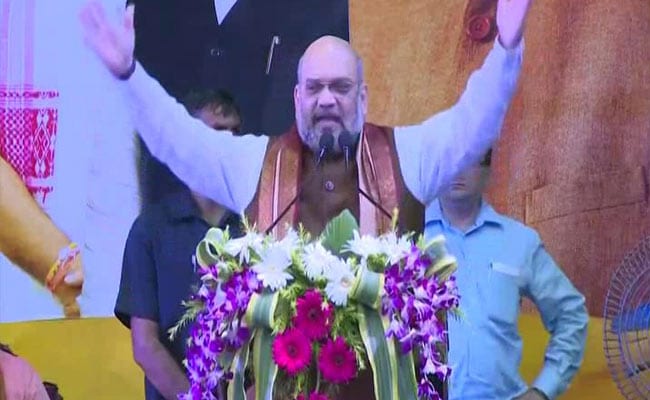 Amit Shah in Bengal: The home minister addressed a seminar on NRC in Kolkata today.

Union Home Minister Amit Shah addressed a seminar on the National Register of Citizens and Citizenship (Amendment) Bill in Kolkata today. This was the BJP chief's first visit to West Bengal since he assumed the office of the home minister earlier this year. The seminar comes at a time when there have been 11 deaths in the state allegedly due to panic over implementation of NRC in Bengal.

Amit Shah has repeatedly said that the NRC exercise will be conducted across the country and Mamata Banerjee-headed Trinamool Congress government in West Bengal had avowed that the she will not allow it in the state.

The TMC has been against the updation of the NRC calling it an "anti-Bengali" move by the BJP.

According to state BJP sources, Mr Shah's seminar is of immense importance as he likely to address all allegations by TMC and "misconceptions" created by it over NRC.

"The TMC has deliberately tried to create a panic in the state over NRC. So Amit Shahji will give us a clear picture over the issue and dispel all the fears and misconceptions," a senior state BJP leader told news agency PTI.

Mamata Banerjee had led a rally against the NRC on September 12 in the city.

Here are the Highlights of Amit Shah's NRC seminar in Bengal:

BJP President Amit Shah in Kolkata: West Bengal and article 370 have a special connection, because it was the son of this soil, Syama Prasad Mukherjee ji who raised the slogan 'Ek Nishan, Ek Vidhan aur Ek Pradhan' pic.twitter.com/eUuSwm1wz0

Amit Shah: Didi(Mamata Banerjee) is saying will not let NRC happen in West Bengal, but I am assuring you, each and every infiltrator in India will be shown the door. You know when she was in opposition&Left was in power, she used to say infiltrators must be forced to leave India. https://t.co/wjtPCmOExApic.twitter.com/kkDihMDik7