The administration has placed a daily five-hour restriction on locals travelling on the arterial highway between Jammu and Srinagar, for 46 days till August 15 when the pilgrimage ends. 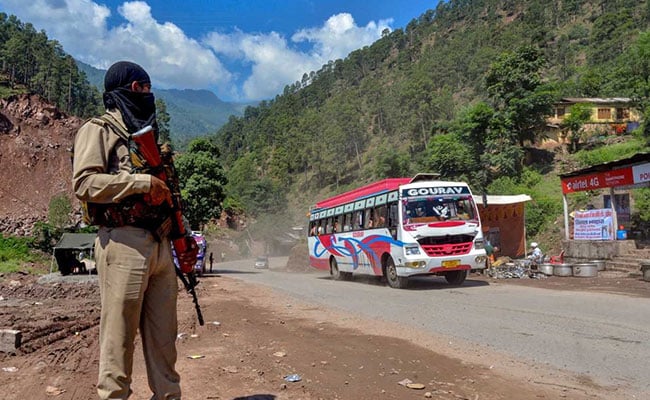 Security personnel look on as a batch of pilgrims are on their way towards Amarnath. (PTI)

A senior Jammu and Kashmir government officer has alleged that he was held up for hours in an ambulance with his father's body on the Srinagar-Jammu national highway because of traffic restrictions for the Amarnath Yatra on Thursday.

Imtiyaz Wani, Director Finance in Jammu and Kashmir government, said that he was taking his father's body to his home in Srinagar from Jammu when the ambulance was forced to stop until the convoys carrying Amarnath pilgrims completed their movement on the highway. The police claimed it is a "misrepresentation of facts".

The administration has placed a daily five-hour restriction on locals travelling on the arterial highway between Jammu and Srinagar, for 46 days till August 15 when the pilgrimage ends.

Mr Wani took to social media to complain. "All civil rights are subordinate to Amarnath Yatra while moving from Jammu to Srinagar. I am not being allowed to carry forward my father's dead body. What hell the life of a common Kashmiri is. Inspector Rakesh of J&K Police on yatra duty categorically said the body shall not be allowed," he wrote on Facebook.

The police said the ambulance was stopped as it tried to overtake the convoy.

He added that the ambulance was allowed to proceed after the officer "ascertained facts".

This yatra will conclude on August 15 coinciding with the Shravan Purnima festival.